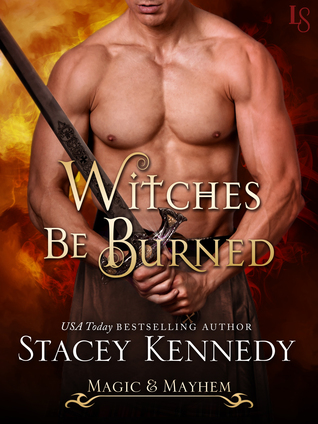 Witches Be Burned is the second book in the Magic and Mayhem series, but with two years passed since the release of the first book, personally, I’d forgotten much of what happened. Luckily, Ms. Kennedy does a great job of reminding readers about the key events needed to understand and enjoy Witches Be Burned. I feel that a reader could easily pick up the book without having read the first one.

Nexi, who grew up not knowing about supernatural beings, is both a witch and a guardian, making her unique and coveted among the supernaturals. In the previous book, Nexi was almost destroyed by a vampire who wanted to drain her of her blood and take her powers. And although new to her powers, Nexi was able to not only kill him, but destroy him using some amazing powers. Fast forward three months, and we learn that her insta-mate, fellow guardian Kyden, is being a bit over protective and trying to keep Nexi out of harm’s way. However, when some of their own are ruthlessly murdered, nothing will stop Nexi from joining those who seek vengeance.

Witches Be Burned is a cross between a paranormal romance and urban fantasy. The story is shared from the alternating POVs of both Nexi and Kyden. Although the pair are a couple from the start of the book, there is a lot of page time spent focused on the couple’s relationship. It isn’t until the last quarter or so of the book that I feel the story shifts more to the action than the romance. And while their chemistry is off the charts, I found that both characters annoyed me too much at times.

Nexi is fairly new to the supernatural world, and I have to take that with a grain of salt. She’s very powerful and seems to have her act together, but she’s also naive and headstrong, making her seem immature at times, especially at the front end of the book. I felt that she didn’t take her role as a guardian seriously and whined when she couldn’t get her way. This also comes across in her jealousy – again, it feels immature how she reacts, putting her personal wants before her role as guardian. Yet by the end of the story, I feel that she did a better job standing up for herself without coming across as childish.

Kyden is an alpha male, but his “over protectiveness” is too much and comes across like he’s not even really seeing Nexi for who she is. The fact that he constantly has to remind himself that she’s powerful and strong makes me think he doesn’t truly think of Nexi as an equal. He spends too much time reminding himself that she can handle “life,” and the rest of the time he’s trying to order her around. I just don’t feel the love.

The primary story is broken into chunks and fit around the interactions between Kyden and Nexi. First, there is the mystery of why Earthworld vampires are joining together and murdering guardians. I was intrigued, and although I wasn’t pleased with the ultimate answer as to why, I found the story interesting. Then there is the peculiar man that Nexi sees in the Otherworld gardens. I have mixed feelings and am a bit apprehensive about his potential role in future books. I will reserve judgment for now, but I am happy that Ms. Kennedy didn’t take the book to places that would have left readers with a “cliffhanger” ending.

Unfortunately, for the bulk of the book, I found that there was just too much going on, and it didn’t seem to come together in a smooth and succinct story. (until nearly the end). Additionally, the book has a conflicting feel to it which makes it come across choppy when maybe it really isn’t. On one hand, it’s hitting a lot of the PNR stereotypes, especially with respect to the H/H and romance. But on the other hand, the book is trying to carve out its own unique mythology within the hard PNR stereotypes. Unfortunately, this clash isn’t always successful and the results feel silly at times (like a vampire “saving” someone by licking her wounds in battle – yuck!)

Overall, I liked the story behind Witches Be Burned and feel that there is promise with the direction the story seems to be heading. And while I feel both Kyden and Nexi experienced positive character development and growth by the end of the book, I didn’t really like them together for much of the story. I’m hoping that each will not slide backwards in the next book, but rather act like adults and work on their issues so they can move forward.

Nexi Jones has lost her family, she’s been stripped of her guardian duties, and she’s still learning the ins and outs of white magic. At least she has Kyden, the smoldering hot elite guardian who’s been there for her every step of the way. But just as Nexi completes her training, tragedy strikes the Otherworld when a fellow guardian is murdered by a group of rogue vampires. Ready or not, she and Kyden trek into the Earthworld to hunt down a killer—and Nexi alone will be put to the ultimate test.

Although Kyden knows that Nexi must fight her own battles, his guardian instincts are raging as he struggles to keep her close. The ruthlessness of these vampires is like nothing he’s ever seen. And at their helm is the Black Witch Astoria, a demon with one burning desire: to shed Nexi’s blood in the name of vengeance. What troubles Kyden even more, though, is the warlock who covets Nexi’s heart. Let the devil do his worst . . . all Kyden can do is love and protect Nexi until his last breath.

Reviews in the Series:
Werewolves Be Damned by Stacey Kennedy (Magic and Mayhem #1)

6 responses to “Review: Witches Be Burned by Stacey Kennedy”