Posted May 24, 2015 by Una in Sunday Snippet Tags: ever after series, Linda Poitevin, Mechem Publishing 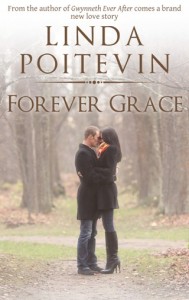 “You still sure it was wise to take two of those things?”

Sean swayed on his crutches, trying to bring one Grace into focus out of the three before him. They weren’t very cooperative.

“The instructions said one or two,” he reminded her. Them.

They sighed. “Yes, but it might have been better to wait until you were home before taking the second,” they suggested.

Sean considered the idea. Then he grinned. “Too late.”

“You are so hammered, it’s not even funny.”

He giggled, disproving the latter part of her statement.

The Graces rolled their eyes. “Come on. Let’s get you into the cottage before you keel over. I don’t have a hope in hell of getting you off the ground in this condition.”

“Then maybe you could just join me.” He waggled his eyebrows suggestively. Then he frowned. Wait. He was waggling his eyebrows, wasn’t he? Damn. He couldn’t feel them. He balanced on one crutch and put a hand to his forehead. Shit. His eyebrows were gone!

Fingertips encountered fuzz and he gave a gusty sigh of relief.

“They’re still there,” he told the Graces.

They stooped to pick up the crutch that had fallen away from him. “I’m not even going to ask,” they muttered, tucking it under his arm again. “Now come on, Wonder Boy. Home and bed.”

He turned his head and nuzzled an ear. “Is that a promise?”

The Graces jerked away. “Oh, for the love of—” They sighed and regarded him narrowly. “If I say yes, will you get your butt in gear?”

“Oh, honey. You have no idea.” Sean swung his crutches forward and followed them eagerly across the clearing, bypassing the Graces and heading for the cottage. “Race you!”

“Slow down, Romeo. We’ll never make it to the bed if you fall, remember?”

He scaled back his speed, but only a little. “I thought I was Wonder Boy,” he said over his shoulder.

“Tell you what.” The Graces reached out to steer him straight as he yawed to the left. “You can be Wonder Boy and Romeo if you can get into the cottage in one piece.”

It took three attempts to negotiate the stairs. By the time he made it onto the deck, Sean’s teeth ached from gritting them, and his shirt was soaked with sweat. He paused at the top to catch his breath, waiting for the pain meds to compensate for the meat grinder he was sure his leg had just gone through. A gentle hand covered one of his on a crutch.

He opened his eyes onto the three Graces. This time, the middle one seemed more in focus, so he concentrated on her. “That,” he announced, “is why I took two pills before coming over here.”

“Can you make it into the cottage?”

He studied the distance to the sliding glass doors. Four crutch-strides, maybe five, assuming the meds hadn’t skewed his depth perception as well as his inhibitions. He nodded. “I can make it.”

“All right. I’ll go around and open the door. You aim for the bedroom.”

“Absolutely,” the middle Grace told him. “I wouldn’t miss it for the world.”

In her absence, he made his way across the deck and leaned against the cottage wall, forehead resting on rough cedar siding. He may have dozed off for a second, because when the door beside him slid open and Grace’s sharp voice called out, “Sean?” he nearly fell off his crutches.

The Graces stepped out onto the deck. There were four of them now.

“Thank God. You scared the life out of me when I couldn’t see you.”

Four Graces were much better than three.

“Of course I care. I’d care about anyone in your current condition.”

“And you called me Sean.”

Four sets of hands rested on eight hips, and the Graces pursed their lips as they surveyed him. “Wow. You are getting more blitzed by the moment, my friend. You don’t usually do a lot of painkillers, do you?”

“Nope. Clean as a whistle.” He pursed his lips to follow up with a demonstration, but only a sad, wet hiss resulted. He frowned. “Hm. That’s harder to do than I remember.”

The Graces gave a snort of laughter. “All right, enough is enough. We need to get you into bed to sleep this off.”

“Bed, yes. Sleep? I don’t think so, darlin’s.” He stretched out an arm to snag the Grace nearest him, but they sidestepped in unison and caught the crutches he dropped. Sean scowled. Now there were four crutches, too? That didn’t seem right.

“Darlin’s? Plural?” The Graces leaned in to peer at him, frowning. “Just how many of me do you see?”

Oh, wait. He was still holding a crutch, so that was a total of five. Much better.

He leaned against the cottage again. “Mm?”

“Four,” he whispered. “Four beautiful, glorious Graces.” He lifted a hand, watched it morph into four, and stroked all the soft, deliciously smooth cheeks before him. “Whoa.”

“Whoa is right.” She caught his hand in hers and slipped the crutch back into it. “Come on, sunshine, let’s move while you still can.”

He wasn’t sure how he made it through the cottage and into the bedroom. One minute he was standing inside the living room while the glass door slid shut behind him, and a heartbeat later, he was flat on his back on the bed. He stared at the ceiling.

“This is weird,” he muttered.

“Which part of it in particular?” Grace inquired, lifting his foot to remove his only shoe.

“Well, it certainly wasn’t piggyback.” With a grunt, she hefted both his feet and tugged them around until his body had no choice but to follow, putting him more or less straight on the mattress…he thought.

He listened to her come around to the side of the bed. Four of her faces swam into view above him. “And the answer,” they said, “is that you walked.”

Together, the Graces reached down to lift his head and shoulders, and slide a pillow under him.

“I’d be surprised if you remember any of this tomorrow.” They smiled and brushed the hair back from his forehead. “Now close your eyes and sleep. You’ve had a long couple of days.”

He caught one of their hands in his and held it to his cheek. “Stay?” he murmured.

He didn’t stay awake long enough to hear her response.