The Music of Temptation 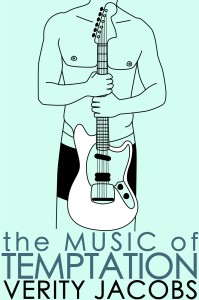 He watched me closely as he grabbed the mic stand again.

“This next song is for a beautiful new friend.”

I felt something in my chest detonate, the shock waves pulsing all the way down to my fingertips. I stood glued to the spot, basking in the heat of his gaze. And just when I thought I might burn up entirely, he switched his attention to the fretboard of his guitar, immersing himself in the opening chords.

The song was new; I hadn’t heard it before. The melody was jangly and sweet, quite different from their older songs, the guitars pulled along by Brett’s sticks as they carved out a soft, steady beat. Every so often the drums would explode, drawing the strings into an almighty crescendo before bringing them back down again.

Jonathan’s lips brushed against the microphone, breathing a soft static into the speakers, and somehow finding every single nerve cell in my body.

“So let’s pretend you let me stay,” he started, the tone conversational even as he belted the words out across the room.

His eyes were closed, but in the cock of his head and the ghost of a smile on his lips, I somehow felt as though he were singing directly to me.

“And let’s say we spent the day inside each other’s head, curled up together on the plains of your bed.”

Alex pulled the guitars up, Jonathan’s eyes fluttering open as he stepped back from the mic to focus on his strings.

But then he leaned forward again, finding my eyes in the crowd.

“I think I might have written a tome across your body, a story down the length of those beautiful legs.”

I swallowed hard and made myself look away, irrationally convinced I would shatter all over the floor if I held his gaze any longer.

“Across shoulder and hip, around navel and thigh, a fable to rouse that inimitable sigh.”

I sighed and swooned. Aiko elbowed me in the ribs, giggling quietly to herself.

The narrative continued, launching into a fantasy of lovers navigating the landscape of a bed together, recording their journey on each other’s skin. Some of it I missed, the guitars vying for attention and drowning out his words. Some of it made me blush crimson, as he described the look and feel of the body beneath his. But the rest of the song threw me into a feverish state fueled by naked lust, as well as something warm and fizzy that ran a lot deeper.

I stood pinned to the spot, overwhelmed by desire, as the song descended into chaos, distortion taking center stage. But out of the wall of sound, I thought I heard the strains of ‘O Canada’, and looked up in disbelief at Alex as he played the familiar tune, grinning indulgently at Jonathan from across the stage.

Jonathan smiled back at him, shaking his head slightly and then glancing down to catch my eye again.

I wanted to lose myself in that stare. My body was wound so tight for him — my nipples hard against the soft fabric of my dress, my mouth ajar as my chest heaved for air. I flicked my tongue out to wet my lips and felt my stomach flip as he registered the gesture with a clenched jaw. Part of me couldn’t believe we’d made it this far without jumping each other.

He stepped up to the mic and took it with both hands, swinging his guitar onto his back as the sound from the speakers petered out.

“Thank you,” he said, his voice sly and sexy.

The crowd echoed him with a roar.

My heart answered with a flutter.

One response to “Sunday Snippet: The Music of Temptation by Verity Jacobs”