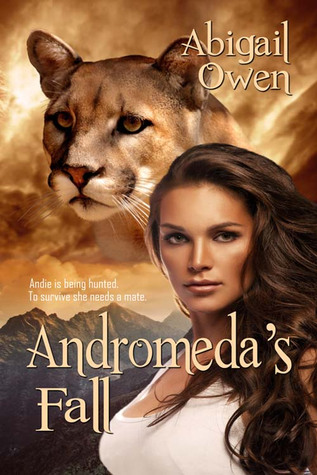 Andromeda’s Fall is the debut novel in the Shadowcat Nation series.  Overall, Gikany and Una liked the interesting world portrayed, the mythology, and the story of Jaxon and Andromeda (Andie).

This shifter paranormal romance was fascinating.  It started with Andie breaking into Jaxon’s territory and took off from there.  We enjoyed how Andie’s storyline wove into Jaxon’s.  Although their meeting and subsequent romance could have easily been clichéd, it wasn’t.  Ms. Owen gave us a few twists and turns that kept it fresh and intriguing.  We enjoyed how well matched Jaxon and Andie were and their journey was as emotionally charged as it was exciting.

Although there isn’t a lot of world-building, there is enough to give the feel of the world while leaving room for us to learn more through future novels.  The building of the mythology didn’t slow down the pace of the novel.  This is a world that appears to have both shifters and non-shifters, though this novel focuses on the shifters primarily.  The shifters are broken into different groups with the shifters who naturally form groups (wolves, lions, etc.) hunting down the more solitary shifters to gain territory.  The normally solitary mountain lions have banded together to form groups loosely allied as the Shadowcat Nation.  Since this book focused on the Shadowcats, most specifically Andie’s and Jaxon’s packs, we look forward to learning more about other animal packs in future novels.

Una did have one hiccup that Gikany did not.  As Una read, she felt that the novel vacillated between an urban fantasy feel and a paranormal romance feel.  This was most notable to her when Jaxon and Andie’s mating ceremony and their first full sexual encounter were glossed over.  Though we see them intimate later (and they have a passionate interlude prior), if this is a true paranormal romance, the mating ceremony and their first full “mating” should have been included.  Though this didn’t detract from Una’s enjoyment (and again, Gikany noticed no lack), it still struck her as odd.

The way the novel ends leads us to the next couple that will be the focus of the next novel.  Gikany and Una look forward to reading the next novel in the Shadowcat Nation series and hope to learn more about this fascinating world of shifters.

Andromeda Reynolds is being hunted. After witnessing her mother’s violent death at the hands of a pack of wolf shifters, Andie has devoted her life to protecting her community of cougar shifters from a similar fate. But now, a greater threat lies within her own pack, and she must run. If she stays, Kyle Carstairs will force their mating, seeking the added political power their union would provide.

Andie would rather chew off her own foot than end up with Kyle. Though, knowing him, she won’t live long either way. Andie’s only hope of survival is to mate Jaxon Keller, the Alpha of the Keller Dare with which she is seeking asylum. But before she can get to him, Andie must first go through A.J., one of the Alpha’s Protectors. What Andie doesn’t realize is that A.J. has secrets of his own. All Andie knows is that the incredibly frustrating shifter insists on challenging her story, her skills, her trust… and her heart.