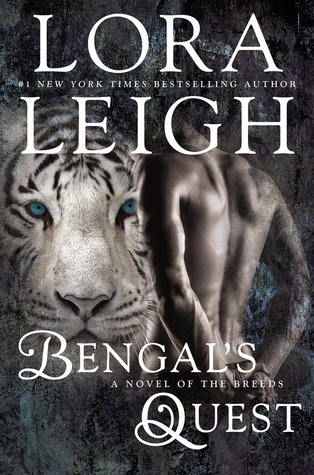 Note: this book is not a standalone nor a good starting point in the series, as there is a convoluted, confusing overall story arc that has spanned several books. The opening prologue flashback helped me recall key parts of the ongoing story, but it’s not enough for a newcomer to the series. Jumping into the mix…

Cat was born a human, but was genetically altered into a Breed in an effort to save her from a childhood illness. For years she posed as Claire Martinez, hiding from the Genetic Council and the Breed who swore to kill her. Claire’s Native American spirit and family kept Cat safe until Claire’s father attacked her, revealing he is part of the Council. Now she has exposed herself as Cat, a Bengal Breed.

Many years ago, Gideon aka Graeme Parker, saved a little girl he called his own. Even though he swore to kill Cat for saving him when she transfused some of her blood into him all those years ago, Graeme did it to protect her from the mating heat. Now that Cat is a grown woman, Graeme knows it is time to claim what is his.

CONFUSED? Yes… this story has been confusing from the start. The multiple personas and vague descriptions of transferring spirits and souls into other bodies has always bothered me a bit. However, as crazy as the storyline has been, I feel that the author did a better than usual job detailing what happened to Cat and others all those years ago over the course of Bengal’s Quest. I finally feel like all of the puzzle pieces have been locked into place and the bigger picture makes some sense.

Although the story was a bit more streamlined, I found I just didn’t care about the romance between Graeme/Gideon and Cat. I kept waiting for that moment when I’d feel something and cheer for the couple, but it never really came. I liked that Cat was strong-willed and appreciated her efforts to reach both Gideon the “monster” and Graeme the alpha. However, I was disappointed with Gideon. After watching his character and actions from the periphery for multiple books, I expected more than what was delivered. And as a mated pair, their romance was mediocre, while the infamous Breed sex scenes were missing their typical edginess.

Additionally, I found myself annoyed with the side characters and potential future storylines, especially one involving Cat’s friend, Khi. This side plot, as well as the introduction of additional Breeds, and what I believe happened to Claire’s spirit are each stories I honestly don’t want to read. I feel let down that Ms. Leigh continues to expand her world rather than write stories around long-standing characters. Finally, the story was riddled with repetitive dialogue and inner-monologing, and could have benefitted from additional editing.

In the end, while I appreciated that Bengal’s Quest was less convoluted and easier to follow that many of the preceding novels, I found that I really didn’t care about the characters any more. I compare the Breeds series to creating a pizza crust from dough: each toss in the air (another book) stretches the overall story further and further away from its center, until it stretches too far and just falls apart. The series, and this story in particular, seems to have lost its shiny goodness and that little something that kept me coming back for more in spite of any flaws or issues. It’s sad to say, but I may have finally OD’d on the Breeds “crack” and can move on. *sniffle*

He was a shadow, ever shifting and insinuating, able to blend in everywhere and anywhere. The elusive ideal conceived and created by the Genetics Council, he went by just as many names as he had identities—the last one being Gideon.

Now calling himself Graeme, he hides in plain sight, terrifyingly close to his goal. A rogue Bengal Breed, he has loyalties to no one but himself. And he has a need for vengeance that surges hot and swift through his veins.

Graeme plans to exact an extreme and ruthless vendetta against those who wronged him—Breed and human alike. All will suffer his wrath: those who created him, those who pretended to love him, and those who betrayed him.

That includes the one at the center of it all: a seductive, enigmatic woman helpless against the man whose desire is just as desperate as his need to destroy.

And he’s on her scent…