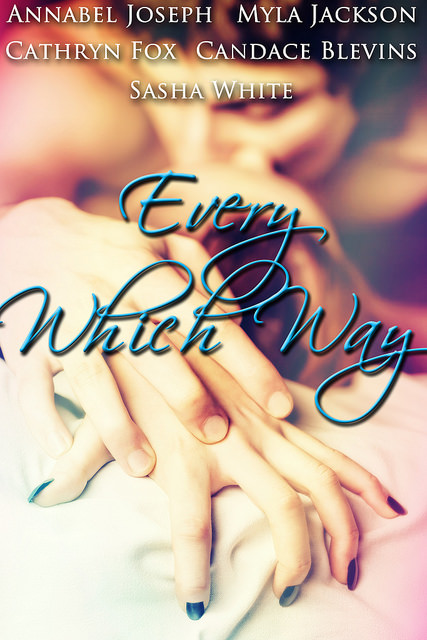 Mechanic Veronica “Ronnie” Mack joined the Overwatch club because she’d given up on finding love, and decided to settle for sexual satisfaction. Then Ian, her childhood crush, walked back into her life as one of the club’s Trainers, and proved that their connection was as strong as ever.

We met Ronnie and Ian in the first Overwatch story, Unfettered. This short picks up immediately after the conclusion of Unfettered, as the pair begin a new romance and venture further into the D/s aspect of their relationship.

All in all, I enjoyed Unabashed. The book continues the ongoing love story of Ian and Ronnie, which is still in progress. The story is a slice of life, but more satisfying. We see both Ronnie and Ian begin to get comfortable as a couple and in their rolls. They each grow a little more. While their story could end there, the author gives promise we will see them again, hopefully securing their relationship and finding love. Their love isn’t in question, but it’s too soon for it, and I’m very thankful the author isn’t rushing into for the sake of an HEA. It’s an enjoyable story, made more so because I’ve already read their beginnings.

Bettina’s Master gets off on loaning her to strangers. Afterward, she’s supposed to report back to him with all the raunchy details. It’s all kinky fun and games, until one of those strangers decides he doesn’t want to give her back…

Mark and Bettina meet because Bettina’s Master tells her to pick up Mark. Mark, instantly recognizing that Bettina is much more than a worthless slave, takes advantage of her offer, whisking her away from Chicago to New York.

The story is shared from the two alternating first person POVs of Mark and Bettina. I’m not typically a fan of this, but their individual voices are different enough and clearly demarcated, so it works.

Normally, I don’t tag my reviews with trigger warnings, but I feel it is necessary to share that this is not anything typical of what I read. Mark and Bettina enjoy the darker side of sex. While a Master/slave relationship and sadomasochism isn’t remotely hot to me in this story, the mind games were fascinating enough to keep me reading.

Overall, Loaned is an interesting story, and I’m glad I read it. The mind games actually lead to some strong emotions, and I enjoyed where the author took the couple. This story is definitely not going to be for everyone, and although I didn’t find the sex “sexy,” I was able to understand what the characters were getting from the relationship and how they came to fall in love.

Pilots, partners and brothers, Jake and Tucker Maddox, are both in love with Molly O’Brien and she’s in love with them. Because of their crazy sibling rivalry she refuses to choose between them, and instead walks away. On the verge of losing the best gal that ever happened to them, the two brothers hatch a desperate scheme to kidnap Molly, carrying her away to their mountain cabin where they convince her she can have them both, if she dares.

Unfortunately, I did not enjoy Boots & Wings, and did not finish reading this story. The dialogue and narrative felt simplistic. The men came off sounding stereotypically shallow. I just couldn’t get into it at all and DNF’d after 3 chapters. For some reason the characters all irritated me.

Pin Me Up Proper by Cathryn Fox
Breaking the Rules series

Bored with the men in her life, actress Janie Monroe is looking for something different. On a whim, she decides to seduce her cameraman, a guy who comes off as a nerdy video gamer. After enticing him at a pin-up photo shoot, she learns that he does indeed like to play, but instead of a game console and controller, his toys are shackles, blindfolds and ropes. Janie soon finds herself immersed in a world of dark passions where her boundaries are challenged and pleasure beyond her wildest imagination is the prize.

Janie is bored with her sex life and is looking for something and someone new. She decides to look outside her usual crowd and seduces the nerdy looking camera man on the set of her TV show. She soon discovers that Kaden is much more than he appears.

Pin Me Up Proper is my favorite story from the anthology. I loved how the whole story, from the romance to Janie’s stalker, didn’t follow conventionality. Things I expected to happen didn’t, and the story was better for it. I also enjoyed the dynamics between Kaden and his hetero-life-mate, Tate. The emotional intensity of the story shines because of their relationship and love for one another, which also brings Kaden and Janie closer. Also, I enjoyed the dynamics of the trio and the alternating POVs. It really helped bring to the surface and understand the feelings involved. Overall, the story is well done, and I really liked this sexy and emotional tale.

Mac is a new werewolf, and still must be watched at every moment to be sure he stays in control. His kink has always been ménage, so when he overhears the beautiful redhead at the bar wanting to take on not only him, but also the werewolf and wereleopard chaperoning his night out… he has to convince them to let him take her home. He might not be trustworthy with a human woman alone, yet, but with two powerful shapeshifters in bed with them, what could go wrong?

Ranger is charged with the safety and development of his newly made werewolf, Mac. He and his partner Jonathan agree to take Mac out to a local bar where shifters are welcome. Since he can’t be left unsupervised, when Mac decides he wants to get laid, the trio find a willing partner in Bethany, who just so happens to be on the prowl for a harem of hot, kinky men.

Acceptable Risk started strong with the trio of sexy men each experiencing chemistry with Bethany. Their night together is hot and holds potential for a longer-term arrangement. However, once Bethany finds out the group isn’t human, they have to perform an odd ritual, and frankly I got confused and found the whole scene off. And while I appreciated that Bethany did not have “insta-love” feelings for the group of men, it did cause for the story to drag on a bit longer than I wanted it to. However, it still was an enjoyable read, and I loved mixing in a little paranormal into the anthology.

Summary of each story is listed above.

Purchase Info:
Every Which Way Anthology

Reviews in the Series:
Overwatch Series by Sasha White

2 responses to “Review: Every Which Way Anthology”