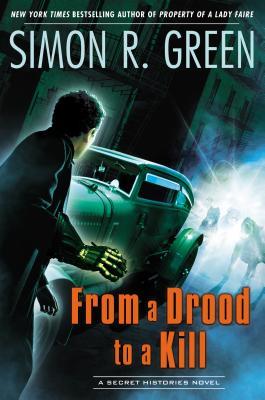 From a Drood to a Kill
Author: Simon R. Green
Reviewer: Gikany & Una
Rating: A-

Mr. Green has done it again.  From a Drood to a Kill is another witty, exciting, and enjoyable Secret Histories adventure filled with quirky characters, humorous banter, and nail-biting adventure.

Despite some tragedy in From a Drood to a Kill, the novel follows what we normally expect from Mr. Green.  He has the most amazing ability to tie his different worlds together.  It is so enjoyable to see the connections between the Secret Histories, Nightside and Ghost Finders series.  The humor and dry wit that are characteristic of the Secret Histories series kept us in stitches even as we fretted over Eddie’s plight.  Although the mythology of the Secret Histories remains strong and true, the overlaps and tangents add a depth to the overall story and world that is uncanny.

We love the different characters and crew that make up this remarkable world.  Molly, the notable other Drood family members, and some much loved characters from some of Mr. Green’s other worlds all make appearances.  We loved the long visits with the London Knights and the Metcalf sisters.

There is not too much we can say about the novel without giving anything away, which is the last thing we want to do.  The way the plot twists and turns, it sometimes seems as though it is going off in a strange direction, but then things circle back around and relate to the overall ending.  Although Eddie has moments that he must endure and fight through alone, he still triumphs in style and wit.

If you haven’t experienced this series, it is time to start.  We’d recommend that you start at the beginning so the characters will mean more and the overall adventures will make more sense to you.  Plus, why deprive yourself of the fun and enjoyment?  We eagerly look forward to the next novel in this series.

Some call me Shaman Bond, but I was born Eddie Drood, the latest in a long line of folks who chase monsters out of closets for a living to keep humanity safe from all that is dark, demonic, and just downright evil. Needless to say, we’ve made our fair share of enemies over the centuries—and made some questionable bargains.

In exchange for the power to fight the forces of darkness, my parents signed over their souls. They’re not the only ones who’ve made deals with Heaven, Hell, and every otherworldly realm in between, but now the bill’s due for several big names in the supernatural community.

Including my girl, Molly. She, my parents, and other major players have been kidnapped so they’ll pay up—or participate in the “Big Game.” The rules are simple: get from one side of the pocket dimension to the other and kill your competitors. The winner’s debt is paid in full, and the losers get themselves permanently lost, body and soul, forever.

To save my loved ones, I’ve got to become a ringer in this deadly contest that’s undoubtedly rigged by the Powers That Be….

Purchase Info:
From a Drood to A Kill (Secret Histories #9)

2 responses to “Review: From a Drood to a Kill by Simon R. Green”