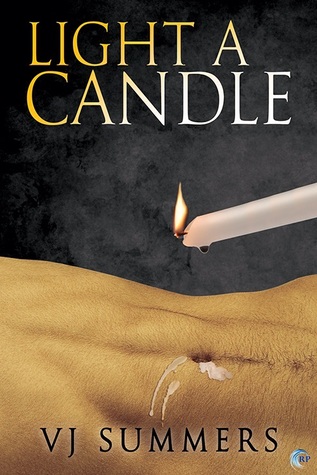 Light a Candle
Author: VJ Summers
Reviewer: B.
Rating: B+

Dustin is a sub down to his marrow. Submission centers him, thrills him, and makes him fly. As a house submissive and member at Club Deviant, he can usually find what he needs–for his body and spirit, at least, if not his heart. That was lost ten years ago to his friend and resident high school god, Will. Who promptly crushed it and abandoned the friendship they’d shared since they were kids. But, when Will turns up at the one place where Dusty can truly be himself, he’ll be tested as never before. And putting his heart on the line again might be too high a price to pay.

Of the two main characters in Light a Candle, Dustin won me over immediately. Even during the flashbacks to his and Will’s high school days, he exhibits strength and perseverance that put me squarely in his corner for the entire story. Dustin describes his need for submission as being “as necessary to him as breathing,” and it’s evident in every scene he participates in. He doesn’t give in easily, but when he does, his submission is absolute and lovely. Just as importantly, Club Deviant is his “home,” in many regards, and I couldn’t help worrying for him when it seemed like he might lose it because of Will’s intrusion.

Will, who often appears to be as arrogant and selfish as he was in high school, I didn’t like as much. While it may not be fair to punish Will eternally for his actions as an eighteen-year-old, his acknowledgement of his earlier cruelty to Dustin didn’t seem particularly sincere, just a means to an end. Similarly, his assumption that gaining forgiveness for the past entitles him to get his way now doesn’t exactly make him worthy of a sub like Dustin. It’s clearly not that simple. Every fear that Dustin has is absolutely valid, and I would have been horribly disappointed if Dustin had lowered his guard and offered up his heart merely because Will wanted him to. Fortunately, the author doesn’t seem to believe Will should have a free pass, either, so it works.

Light a Candle tells Dustin and Will’s story through the BDSM scenes that play out at Club Deviant, along with the more conversational interactions that they engage in. There’s plenty of kink to read about, all of it braced by discussions of limits beforehand, and proper aftercare when a scene is over. In addition, this story explores some other important distinctions, such as the difference between sex and submission, as well as that of submission of the body vs. that of the spirit. Dustin may crave the dominance that Will is offering, but that doesn’t mean he should ignore his fears that Will might break him.

On the whole, I found Light a Candle to be an engaging, thought-provoking, highly sensual exploration of two people who are trying to find happiness, and hopefully love. While their individual roles as a Dominant and submissive are intrinsic to their very natures, Will and Dustin are still seeking the same thing: completion. Though I didn’t like Will very much, especially in the first half of the story, I think he was, ultimately, the ideal Dom for Dustin, which went a long way towards redeeming him, in my opinion. Club Deviant, along with all those who operate within its walls, was a wonderful setting for Dustin and Will’s tale, and the author’s commitment to the subject is apparent throughout. Light a Candle is definitely a keeper, and I wouldn’t hesitate to revisit this world, should another story set here ever find itself in need of telling.

Will broke Dusty’s heart their senior year. One unexpected moment of passion between them, and Will freaked out. Not only wasn’t he gay, but he wasn’t kinky either—or so he insisted to Dusty. Their long friendship ended, and Dusty was left with only bittersweet memories of their last movie night together.

Ten years later, out as gay and a Dom, Will auditions for membership at Club Deviant, only to find that he’s been assigned an all-too-familiar submissive. His scene with Dustin feels like fate, and he’s determined to get back what they once had—and more.

Dustin had buried the pain of rejection deep, but playing with Will conjures all his memories of that one electric moment they shared and the friendship it destroyed. He’s built walls around his heart high enough to keep out the Trojan Army, but together, he and Will may find the courage to move beyond their past and face their future together.