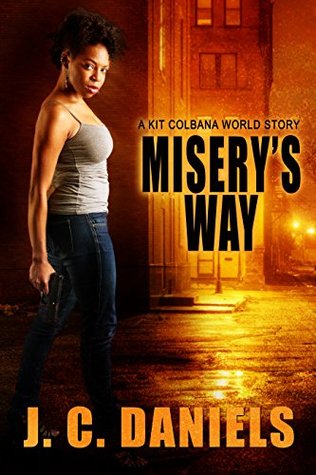 Frankie is a non-human of unknown origin. She keeps her true nature and identity hidden for fear of being captured, or worse. She’s torn by her dark side, which craves and needs misery and suffering. However, she also has a side that longs to heal and fix pain. She balances both parts by posing as a faith healer; however now that someone has discovered Frankie, it’s time to move on.

Misery’s Way is a short story told from the first person POV of Frankie. It is set in the Colbana Files world, and although not told from Kit’s POV, the story is germane to Kit’s whole journey and the overall series. So, it’s a “must read” for series regulars, and probably not the best place for newbies to begin. And honestly, if I hadn’t read all of the books in the series, I would have been lost at times. One issue I had with Misery’s Way was the feeling of disconnectedness as the story jumped from scene to scene, especially when Frankie explores Kit’s memories.

And with that, I have mixed feelings about Misery’s Way. First, the story is VERY SHORT and is more like the prologue to the next book, albeit told from someone else’s POV. Second, the book ends at the 38% mark of the mobi version, followed by a previously released novella (which I’ve already read and reviewed), and then an excerpt from the author’s upcoming sci-fi title. With those two things in mind, I struggled to understand why this short story wasn’t integrated into the next full-length title rather than left as a stand alone story. Granted, it is from another person’s view point, and it does add value to the overall series and world, but it just felt so incomplete, it left me frustrated.

Overall, the storyline is interesting. I enjoyed reading about Frankie and her partner, Saleel. However, I’m so used to reading from Kit’s POV, I struggled a bit with confusion when reading the book from Frankie’s POV, especially when she shared page time with Kit. However, Frankie and Saleel both intrigued me, and I expect they will be a large part of an upcoming Kit book based on what happens between Kit and Frankie. I honestly look forward to that, regardless of my frustration with this story in particular.

Misery’s Way is an interesting and intriguing addition to the Colbana Files series, and I believe it will help evolve the series into the next story. I enjoyed meeting the mysterious Frankie and her companion Saleel, and I look forward to finding out more. However, the fact the story is more like the opening prologue for a longer story, and that it was so short, I was left feeling frustrated.

Love the Kit Colbana Files by JC Daniels? Then you’re sure to love this brand new story from JC set in Kit’s world… Misery’s Way.

Her name is Frankie. At least, that’s what she calls herself.

She looks human, but she’s no more human than she is a faith-healer. That doesn’t stop her from using her…more unique abilities to take care of certain needs. It’s those abilities that lead to a chance encounter with an unusual woman in Florida.

It’s a chance encounter with fate that will set these two down a collision course with destiny.

Release Date: June 22, 2015
Publisher: self-published
Series: Colbana Files #4.5
ASIN: B00VGP7ZOM
Genre: Urban Fantasy
Format(s): e-book
Book Source: NetGalley
*Note: I am a member of the author’s street team. This did not have any impact on my review.

Add it to your TBR pile: Goodreads

Writing under the pen name, JC Daniels for her Urban Fantasy, Shiloh Walker is an award-winning writer…yes, really!  She’s also a mom, a wife, a reader and she pretends to be an amateur photographer.  She published her first book in 2003. Her newest series, Secrets and Shadows, launched with Deeper than Need, followed by Sweeter than Sin and Darker than Desire.

Have questions for JC/Shiloh? Make sure to check out the FAQs here and here!