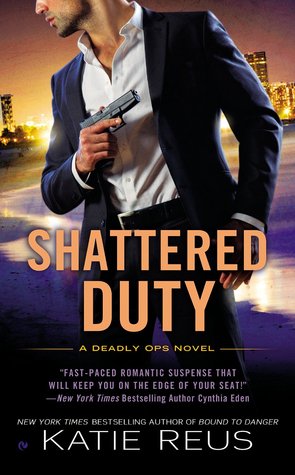 Shattered Duty is our favorite Deadly Ops novel so far!

We enjoyed the story of Levi and Selene. We liked the connections between them and the slow burn of their romance. Despite an overwhelming initial attraction, the time they take made their romance solid and believable. Considering the emotional scars that Levi has, their slow pace was perfect. The conflicts and challenges in their relationship were also spot-on, considering how they met. We really enjoyed how they worked and struggled with each other as they tried to not just get what they wanted but also get themselves to where they needed to be.

The story of the antagonist was also really good. He was a fitting nemesis, and we enjoyed the tightening of the noose as Levi and Selene got closer to finding him. The final battle was both action-packed and a bit humorous. The unexpected allies were a nice touch and we enjoyed the intrigue of the storyline.

The only jarring note was that Selene has so many skills at her age. She is both a master hacker and a skilled assassin. Since she is invaluable as a computer guru, we are amazed that she was allowed to be an assassin too. We can understand her being a computer genius, but then to go on and excel at assassin work without military training is a bit much.

Overall we continue to enjoy the Deadly Ops series. It is a fun, action-packed, tension-filled series. If you haven’t picked it up, you might just want to, but we recommend starting from the beginning. Levi’s story starts in a previous novel so it would make Shattered Duty mean more if you have the benefit of the previous books.

When his wife was murdered two years ago, Special Agent Levi Lazaro turned his back on everything he cared about. Ever since, he has thought of nothing but vengeance. Now he’s finally uncovered the identities of those who killed his wife—and he’s ready to destroy them at any cost. He won’t let anything stand in his way—not even a beautiful NSA agent on a mission of her own.

Special Agent Selene Wolfe prides herself on being the best. Her fearlessness and quick-thinking make her the perfect person to take down a deadly terrorist cell. But she needs Levi’s help, and the moment he shows up, Selene knows her objectivity—and her heart—are in trouble.

As the two strike an uneasy alliance, Levi finds himself tormented by his desire for Selene—a feeling he thought long dead. But when their mission takes an unexpected turn, he finds himself faced with an impossible choice: either put aside his need for revenge, or save the woman who’s reawakened his soul…