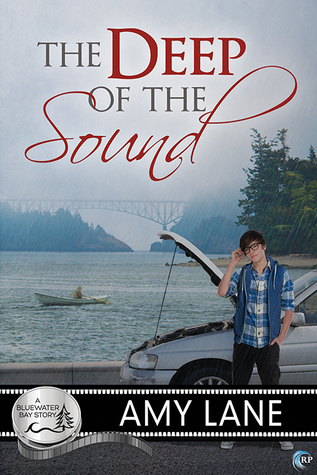 The Deep of the Sound
Author: Amy Lane
Reviewer: B.
Rating: A

Before he was left to care for his great-uncle, Nascha, and little brother, Kier, when his parents died, Calladh McCorkle had been destined for scholarships, college, and a future as bright as he could make it. Though he’ll do anything for his family, he can’t deny that the losses still hurt, and the passing years have made him angry, bitter, and just plain tired. But, when he offers to give a stranded, rain-soaked stranger a ride to town, Cal’s life seems like it might be changing for the better–if only he can find the courage and faith to follow his heart one more time.

Taking chances isn’t something Avery Kennedy ever thought he knew how to do well, but getting away from his jerk of an ex-boyfriend and determinedly oblivious parents is a great motivator. Having a broken down car and an unexpected financial crisis, however, are nearly enough to send him scurrying right back home. But Avery is nothing if not determined. It also helps that Cal is everything he’s ever dreamed of in a lover and partner. What Avery wants could be the answer they’ve both been looking for, and he’ll fight anyone who tries to get in their way—even the man he’s come to love.

While quite a few of the characters I’ve had the pleasure of reading have had painful backstories, I can’t think of many who have been as embattled as Calladh. We first saw Cal in Nascha, from the Lights, Camera, Cupid! anthology, when he was severely ill and Nascha was lost in his own memories. The Deep of the Sound gives us much more of Cal’s story, including that same night from his own perspective. At the age of twenty-four he’s already taken on more responsibility than most people have to face in a lifetime, and, like Nascha, he can’t see any way out. Theirs is a legacy of loss and self-sacrifice, and the effect these burdens have on Cal is heartbreaking.

Avery, on the other hand, comes from such a different place that it’s a wonder that he and Cal are able to understand each other at all. In fact, Avery provides a fair amount of the levity in The Deep of the Sound. While Avery’s life has been complicated in many respects, he still hasn’t had to deal with everything that Cal has. Rather than offering misguided advice or making naïve predictions about a brilliant tomorrow, however, Avery simply gives of himself, which helps in other, unexpected ways. He is patient and accepting, and never once tries to pretend that he knows what Cal has been through. Perhaps best of all, he offers to share his own hope with Cal, and waits for him to accept it. Avery acknowledges that the past does matter. But, the future does, too, and giving up one for the other won’t help anybody.

I’ve heard great things about Ms. Lane’s writing for some time, and can now readily attest that every bit of that praise is much deserved. Her ability to “show” rather than “tell” made getting to know these characters a far more intimate experience than it otherwise might have been, leaving their struggles, pain, and hopes stripped-down and accessible. On a more personal note, and having a family member of my own with PDD, I appreciated her treatment of Cal’s younger brother, Kier, more than I can express. I highly recommend reading the author’s notes that preface The Deep of the Sound, since these stories are often complicated and beautiful, as well.

From beginning to end, The Deep of the Sound is a touching and provocative tale of sacrifice and second chances. Cal and Avery’s journey is so filled with the threadbare, matter-of-fact determination they each possess to get to the other side of every obstacle they face, that there’s no room for flowery promises and useless lamentations. The narrative is strong enough that including such things would only do the story a disservice. As was the case with Nascha, this isn’t an effortless read. Neither is it so heavy that either main character seems in danger of being eternally lost. Cal has simply been in a dark place for a long time, and adjusting to the light isn’t easy. Watching he and Avery as they tried to do so was truly a pleasure, and one I’m sure I’ll revisit again soon.

Cal McCorkle has lived in Bluewater Bay his whole life. He works two jobs to support a brother with a laundry list of psychiatric diagnoses and a great-uncle with Alzheimer’s, and his personal life amounts to impersonal hookups with his boss. He’s got no time, no ambition, and no hope. All he has is family, and they’re killing him one responsibility at a time.

Avery Kennedy left Los Angeles, his family, and his sleazy boyfriend to attend a Wolf’s Landing convention, and he has no plans to return. But when he finds himself broke and car-less in Bluewater Bay, he’s worried he’ll have to slink home with his tail between his legs. Then Cal McCorkle rides to his rescue, and his urge to run away dies a quick death.

Avery may seem helpless at first, but he can charm Cal’s fractious brother, so Cal can pretty much forgive him anything. Even being adorkable. And giving him hope. But Cal can only promise Avery “until we can’t”—and the cost of changing that to “until forever” might be too high, however much they both want it.

Purchase Info:
The Deep of the Sound (Bluewater Bay #8)

Reviews in the Bluewater Bay Universe

One response to “Review: The Deep of the Sound by Amy Lane”