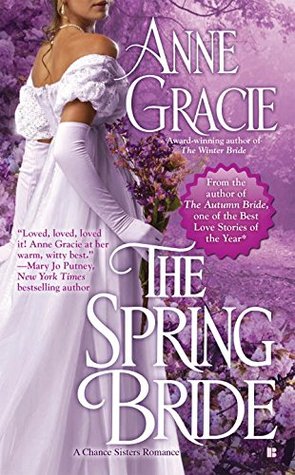 Those that regularly read my reviews know that I am not new to Anne Gracie or the Chance Sisters series. After the second book in the series, The Autumn Bride, left we wanting, I am happy to report that was not the case with The Spring Bride. The warmth and banter that I have come to love from Ms. Gracie was back as Jane and Zachary get to know each other mainly through long walks around Berkeley Square. The inner struggles and unloading for life’s lessons and baggage was addressed and happily ever after was achieved. It was a lovely read filled with well written characters that kept me engaged and smiling.

I enjoyed getting to know Jane better and seeing her come to terms with the baggage left from her difficult childhood and realizing that love and security can, in fact, come at the same time in the same package, if she allows herself to trust someone outside of her sisters and Lady Beatrice. Her struggle is well played and wonderfully written as she realizes that she is in fact in love with Zachary. She is smart, spunky, and spirited and willing to do anything for those she loves.

Zachary is a funny, engaging rouge who comes to realize that he can go home again. He has a tender heart, a fierce desire to do right, and is quick to protect women and animals, which won me over immediately. He stands strong and steady as he fights for his inheritance, his freedom, and Jane’s heart, all while keeping his sense of humor. I enjoyed watching him come into his own as he discovered and fought for Jane’s heart. His attraction to Jane is evident from the moment they meet, and it was easy to feel their chemistry throughout the novel.

One of the things I really enjoyed in the book was that the chemistry between Zach and Jane was real and intense, and it wasn’t shown through sex scene after sex scene. It was subtle a look here and a touch there, making it lovely. I never had to worry about leaving my book open where my kids might see because the emotion and heat was written in such a manner that is wasn’t offensive to the more gentle of people, and I appreciated that.

As usual Ms. Gracie sprinkles her story with fun, witty secondary characters that keep Jane and Zachary on their toes, serve as comic relief and a voice for reason with necessary without ever stealing the scene. They are a perfect balance to the main storyline. Lady Beatrice and her mischievousness, Daisy and her voice of reason and grounding influence, and Gil with his insightfulness and candor are a few of my favorites. We don’t see a lot of Abby or Damaris but there is just enough of them sprinkled in to fill in any back story you might need if this is your first encounter with the Chance sisters.

Overall I found The Spring Bride to be a delightful read, reminding me frequently of Cinderella, without ever feeling like an actual remake. It is a perfect read for the summer. Throw it in your beach bag with a bottle of sunscreen and a cold drink and escape to England while soaking up the sun. I think you’ll really love getting to know Zach and Jane while you visit.

On the eve of the London Season, Jane Chance is about to make her entrance into high society. And after a childhood riddled with poverty and hardship, Jane intends to make a good, safe, sensible marriage. All goes according to plan until a dark, dangerous vagabond helps her rescue a dog.

Zachary Black is all kinds of unsuitable—a former spy, now in disguise, he’s wanted for murder. His instructions: to lie low until his name is cleared. But Zach has never followed the rules, and he wants Jane Chance for his own.

If that means blazing his way into London society, in whatever guise suits him, that’s what he’ll do. Jane knows she shouldn’t fall in love with this unreliable, if devastatingly attractive, rogue. But Zach is determined—and he‘s a man accustomed to getting what he wants.

One response to “Review: The Spring Bride by Anne Gracie”