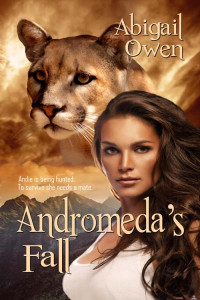 Many minutes later, satisfied that she was alone and that no one was coming for her… yet… Andie moved towards the door.

Cracking it open a hair, she looked down and saw a long stretch of closed doorways in both directions. Based on the layout of the building and the location of the window, she determined she needed to go to her right.

Andie tensed to open the door all the way and then froze in place when a deep male voice sounded from directly behind her. “Stop where you are.”

Andie tensed, adrenaline pumping through her body as swear words went off like fireworks inside her head. Only her years of training kept her from panicking outright. She didn’t move by so much as a twitch as she waited to see if he would attack or talk it out.

“Close the door,” the deep voice continued. “And then turn slowly and face me.”

Andie rose, taking care to keep her wounded arm from view. If she could keep the evidence of her fall from grace hidden, she’d have a better shot at surviving the encounter and making it to the Alpha. If she could get to him and explain, then maybe she had a chance.

Once she was facing her new opponent, she tried to take measure of him. The room was dim, and she dared not shift, not even just her eyes, in case he took it the wrong way and attacked. She couldn’t tell much about him other than that he was very tall. At five-foot-nothing she always had to look up, but with this guy she had to look way, way up to try to see his face. He would be a big mountain lion in his cat form, even for a male.

The stranger said nothing for several long moments, holding eerily still, his eyes taking in every detail. Andie didn’t move or speak. She knew he was sizing her up just as she was assessing him. She also knew what he’d see—a slip of a girl who’d inherited her mother’s bronzed Brazilian beauty. Male cougar shifters rarely saw what she really was and frequently underestimated her.

“I’m not going to ask how you got in here. Clearly, our security needs reviewing.”

Andie didn’t betray her satisfaction at his comment. “I’m sure it’s fine. Very few measures would work to keep me out. Or in.”

Andie merely shrugged. “Off night.” In more ways than one.