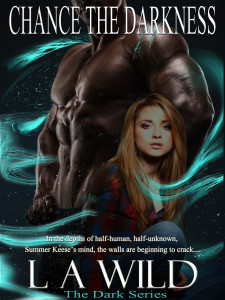 I turn to serve meringue pies to the designated table. “Marinus,” I gasp, almost dropping the plates.

With burnt-copper hair styled in the same aristocratic trend as two nights ago and a white scarf wrapped around his neck, the look on anyone else would appear feminine, but on him it doesn’t. I take in his black shirt tucked into black trousers, topped with the long black coat. He’s been taking fashion tips from Black.

“I’m sorry, mon petite.” He stands from the table of two. “I’ve shocked you. Here, allow me.” He gracefully removes both plates from my hands, placing them onto the metal round bench, as if he’s been waiting tables all his life.

I brace for the onslaught of exotic sexual lust because I figure what I felt the other day was more than the chemicals being pumped into the club.

“Have a seat.” He gestures with his fork toward the empty chair opposite him.

Nervous, I glance round. There are a couple people milling about, minding their own business, but apart from them, the place is empty.

“I took the liberty of ordering you pie,” he states, interrupting my thoughts.

I shake my head. Black inexplicably warned me to stay away from the blood drinker. Now, the vampire who is not a vampire happens to be hunting me across Glasgow—during the day, before the sun sets. I thought all bloodsuckers melted before dusk. Just goes to show how much I know.

I step away from the table. My hand rubs against the Band-Aid still covering the marks he left on my neck.

“Ah, my little one.” He crosses his legs. “I’ve left marks. How very careless of me.” He leans back in the wicker chair. “Perhaps I can heal those for you.”

“I can do many things, Summer Sun. Watch.” Using his fork, he points across the café. “Am I to presume she’s your employer?”

An oversized woman, with grey hair wound on top of her head in a loose bun, scurries around empty tables.

There’s a moment of awkward silence as he inclines his head.

Jane my employer stops mid movement to sit on one of the metal benches. His eyes glaze over.

“The truth is not always reality,” he murmurs. “Your shift is over.” He gestures again at the chair.

“Your employer doesn’t seem to think so.”

“Why would Jane think I’ve finished my shift?”

“Because I can be very persuasive.”

I glance at Jane. She waves, her smile pinched.

“Take the offered chair, Summer, or I’ll have her walk under the nearest lorry.”

I glance back then take the chair. “Why are you here?”

“There are five other cafés on this street. All serve lemon meringue pie.”

He stabs a fork into the dessert. “Maybe I like a little Summer with my pie.”

I don’t laugh at his bad attempt at humor. “I thought you said you can heal me.” I change the dangerous direction of the conversation. “I’ve been here for at least a minute, watching you eat pie, and I still have two puncture wounds embedded in my neck.”

“I do like my morsels feisty.” He chuckles, taking another bite into the food impaled on his fork.

Never one to back down or roll over and play dead, I push further. “Black tells me you’re not a vampire. So, what are you?”

He stops chewing. “Interesting. What else did my brooding arch rival have to say?”

Not much, but I’m not about to disclose any secrets. I keep my mouth shut.

“Clever girl.” He masticates his dessert.

A soft purr slides up against my mind, feathers across sand. I’ve delved into enough heads to know when someone’s attempting to get into mine, like Marinus is trying to do. But since I’m pretty sure no one’s ever attempted to hack my head before, I’m unsure how to stop him. I try using the shield.

I don’t feel him anymore.

He swallows the food then he’s talking to me again. “In this war, my side of the fence has a lot more—how would you say?—odds at surviving.”

My food remains untouched. “Surviving what?”

He gently places the fork onto the now-empty plate. “There’s a book.”

I stop my jaw from dropping all the way to the floor. The Finis Dierum? How does he know about the book? I look straight into his eyes and set up the connection. But not just any connection, I want his memories.

My eyes narrow as I focus, pushing through his skin and bone, until I pop into a ballroom.

Women laugh, the sound shrill, fake, he knows them for what they are. Their pastel faces caked under white powder, black beauty spots dotted on their cheeks, across their décolletages. They’re fake, all fake.

A gold goblet covered in blue gemstones protrudes from his right hand. He jolts, red liquid spills onto his white frills—

Panting, sweat peels off my forehead. I’m back in the coffee shop. The vampire who is not a vampire is super pissed.

2 responses to “Sunday Snippet: Chance the Darkness by L.A. Wild”