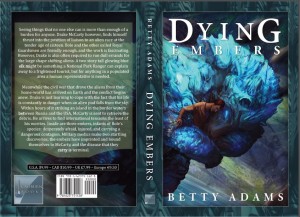 “Was it really necessary to be that harsh?” Sever asked Healer as he turned to respond to yet another indicator on the main computer.

Healer spun around, ready to lash out at the assassin, but stopped himself. He blinked his eyes for a moment and cleared his CPU. “Sever,” he finally said, and the weight of all the deaths he had witnessed across the bitter civil war seemed to weigh in his tone, “if I were back on Lar with the full resources of the Imperial Cavern of Science, there would still be next to nothing I could do for those embers. Here…with this?” His hand swept out to indicate his sparse lab and jury-rigged composite of human and Larian technology. “It would be far crueler to keep hopes up.”

The meaningful look Healer was giving him caused the assassin to tense defensively. He glanced to the side to make certain that O’Beirne was occupied. “Did you want me to take over the task for you? As I am so much better at administering cruelty than you?”

Healer shook his head with a dismissive flash of light. “Don’t try to intimidate me, Sever. I have known you for far too long. And no, this duty is mine and mine alone. I was merely fascinated that the only one of us to have yet accepted a name from the humans seems to be the most affected by their suffering.”

Sever gave a snarl of denial and leaped up to pace angrily, but there was no conviction behind the waves of irritation he radiated. Healer returned his attention to the maintenance program he was running, silently dismissing the second-in-command. Sever frowned at him, then gave a small sigh. He felt an uncomfortable burning in his core. Usually he did not care what the others thought of him personally. But these were embers. He continued to watch as Drake carefully massaged the amber liquid into the purring children. If what they had been able to gather from Drake’s translation of the fragmented data was right, the little ones had never known anything but pain and cruelty. At least now they were in the care of someone who loved them. They already owed so much to a human who was barely out of the ember stage himself. Of course Sever was concerned about his well-being.

Drake tried—he honestly tried—to avoid interfering with the scientific work. He simply couldn’t resist coming to look over his sister’s shoulder as she ran the tests on Sal’s excretions. He left his three embers curled up together happily. Not asleep—Healer had explained that Larians never really slept in the same sense that humans did. With a planetary surface that was constantly in motion, their species had never had the luxury of shutting off motor function for a third of their lives. But they were quiet at least.

Drake was about to ask Ama a question when he felt a tug at his leg. He glanced down and smiled. Skyfire was using his pants to stand and look up at him earnestly. The young man was about to put him back to bed when the ember opened his little silver mouth.

Ama dropped the syringe she was holding in astonishment. Drake felt his brain turn to happy mush, and a huge grin spread across his face.

“Of course, Sky,” he said, scooping the ember up against his chest.