To celebrate the release of Trouble on Tap (Sweet Salvation Brewery 3), I got together with some of my favorite author friends for a little virtual party and you could go home with the big prize! 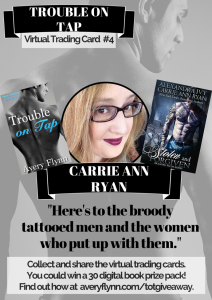 Oh yes, the grand prize for playing the game is 30 digital books (one from each of the featured authors and a few extra from me). All you have to do to play along is share the virtual trading cards featuring my author friends on your social media (such as Twitter, Pinterest, Facebook, etc) and use the Rafflecopter giveaway below to record your entries.

So where can you find the virtual trading cards? I’ve posted a few on my website to get you started. Plus you can find more at Read, Love, Blog, Fiction Vixen, The Book Nympho, Scandalicious Book Reviews and That’s What I’m Talking About. Those bloggers have exclusive excerpts from Trouble on Tap too, so you really should go check them out. Those sites are AWESOME!

In addition, when you click on the Rafflecopter below, you’ll notice that there is a direct link to each author’s card in the entry option. For example, when you click the Share Laura Kaye’s Card option, you’ll see her name is underlined and blue. Just click that link and you’ll be taken directly to her virtual trading card. Then all you need to do is save the card on your computer/mobile device and then go share it on social media. Each virtual trading card you share is another entry for the grand prize of 30 digital books (just don’t forget to paste the link to your social media post in the Rafflecopter entry option for that author). Bam! Easy peasy!

But that’s not the only awesomeness going on today. Join the Trouble on Tap release party on Facebook and you’ll get a chance to chat with the authors featured on the virtual trading cards, plus many of them are giving away even more books during the party!

And if you haven’t gotten your copy of Trouble on Tap (Sweet Salvation Brewery 3) yet, what are you waiting for? It’s 99¢ during release week only and then the price goes up to $2.99, so grab it while it’s on sale! 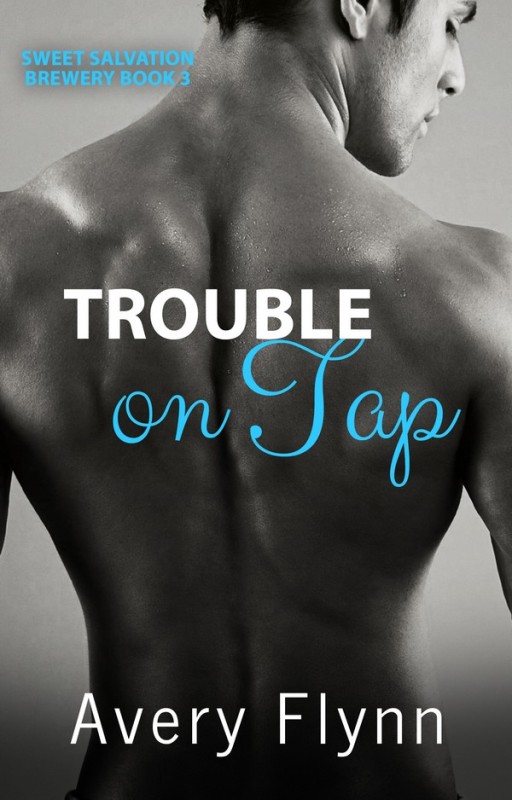 What fun is life without a little bit of trouble?

Staid and stalwart veteran Mateo Garcia has seen more trouble than a man ever should in his lifetime. He’s gone from pretty boy Marine to a small town police chief with a chip on his shoulder and scars covering the left side of his face. Now his former lover, Olivia, is back in town and living next door.

When the two are forced to work together to fix up the crumbling veterans’ center, the sparks fly between the beauty and the man who sees himself as a beast. Not everyone is happy that Olivia is back home though and Mateo has to choose between the town who wants her gone and an uncertain future with a woman who he thinks could never love him…

“Finally coming to your senses and giving up?” Mateo’s fingers curled around her elbows, steadying her.

“You showed up.” Until that moment, Olivia wasn’t sure he would. The fact that he had, made her as nervous as she’d been the first time she’d strutted down the runway in five-inch heels, lingerie and a giant pair of wings. She stepped forward and turned around to face him.

Thank God he wasn’t in full uniform or her panties might have melted.

Who was she kidding? The strap of silk covering the good china was already toast just looking at him in his form-fitting jeans and a black polo with the Salvation Police Department logo. The morning sun reflected off his aviator sunglasses, the bottom of which touched the scar twisting its way up the left side of his face. 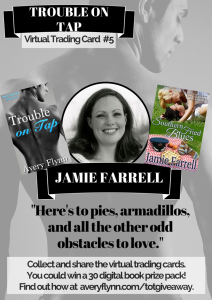 As if he knew she was looking, he turned his head and stared at the center’s leaf-stuffed gutters, blocking her view of that side of his face. “I told you I’d be here.”

For somebody who told her the other night to look her fill, he sure didn’t like anyone actually doing so. She didn’t blame him—staring strangers were never fun—but it pissed her off that he felt the need to hide part of himself.

“And you always keep your word.”

That brought his focus back to her. “Always.”

Simple and succinct, there was enough cocky self-assurance in that single word to make Olivia realize she needed to regain control of the conversation. The veterans’ center. Fundraiser. Hot guy.

No! Not that last one.

She inhaled a deep breath and immediately regretted it. Some of the funk from inside the building clung to her clothes. “I think something died in there.”

He poked his head in the center’s door and sniffed. “That’s urine, not decomposition.”

Okay, if she had to pick between the two, she’d go with pee but still… “How can you be sure?”

He took off his sunglasses and quirked an eyebrow. “So are you determined to do this?”

“Yes. Photos will help get people talking.” Pulling her phone out of her cross-body purse, she walked to the door.

“Like folks have trouble with that around here.” He didn’t move from the doorway.

He wasn’t completely blocking her entry, but to get in, she’d have to squeeze through the narrow pocket between his biceps and the doorframe. That wasn’t gonna happen. She pushed against his arm with one finger, ignoring the electricity that sizzled up her own.

“True, but now they’ll be talking about the center and how it needs to be fixed. We’ll include the pictures on the fliers for the fundraiser.”

Mateo pivoted, giving her just enough space to walk through the door. “Nothing like a little exploitation, huh?”

Her step faltered, but she tamped down her annoyance. The idea was to charm Grumps Garcia into coming over to her side. Telling him to fuck off wouldn’t help her cause.

Faking it like the cameras were just around the corner, Olivia turned and gave him her best America’s-sexy-sweetheart grin. “Nothing like helping people understand that their help is needed.”

It only took three steps inside the center to discover just how much help was needed. Two years of only a poorly secured tarp between the building’s interior and Mother Nature hadn’t been pretty ones. The hardwood floor was warped from rain that had gotten through the loose tarp and broken windows. Dirt and leaves covered nearly every square inch of the mangled floorboards. Then, there was the stench. Cats, vermin, and God knew what else had used the veterans’ center as home base at one time or another, leaving behind now-rotted food scraps and worse.

Olivia squirmed as the urge to get the hell out of there clawed its way up the back of her neck. She may have grown up in the sticks but that didn’t mean she’d ever been a fun-loving outdoorsy girl. Dried leaves crunched behind her. Her shoulders jerked up to her earlobes. Don’t let it be a rat. Please don’t let it be a rat.

“You seem a little tense.” Mateo was a big guy but if it wasn’t for the leaves, she never would have realized he’d left his post by the front door. “More work than you expected?” 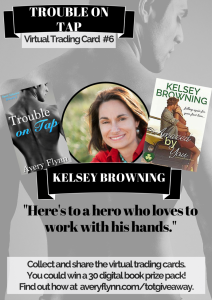 A giant “hell yes” to that one. “Not really.” He already thought she was in over her head. She wasn’t about to confirm it.

She took out her phone and started snapping pictures of the mess while mentally working on the marketing plan. Fliers. Social media. She’d get together with the other craft brewers in the area for the beer crawl, where they’d bring the beer to the customers instead of having people travel from brewery to brewery to sample the latest beers. She could raise money, but could she raise enough to gut the place and start over? Because that’s what it was going to take.

Watching her phone screen, she took a step back to get a better shot of the splintered floorboards. Her heel popped through a weak spot in the floor and she stumbled backwards. She flung her arms outward but it was too late. Gravity wasn’t about to let her go.

Mateo’s strong hands gripped her waist, pulling her back from the brink and up against his hard chest with enough force to nearly knock the breath out of her. At least that was the excuse she was using to explain why she let her cheek rest against his soft cotton shirt for a few beats longer than needed and took an extra-deep inhale of his spicy cologne. It was all medically necessary.

This giveaway is run by the sponsor, Avery Flynn. The giveaway is open during the time specified on the Rafflecopter form. Winner(s) chosen at random from all eligible entries. This contest is open where not prohibited by law. Open to participants, 18 years or older, who are legally allowed to participate in such a contest as allowed by their local laws. All federal, state, local, and municipal laws and regulations apply. Void where prohibited. No purchase necessary. By participating in the contest, participants agree to be bound by the decisions of the contest sponsor. Prize will be delivered by the author. This blog, its reviewers, and the owner are not responsible for items lost in the mail. By entering this giveaway, participants agree to abide by these terms.