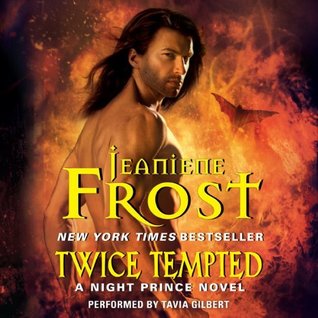 The second Night Prince book starts with an emotional rollercoaster and ends on a bit of a jaw drop reveal, leaving me ready for the next book. Twice Tempted opens about six weeks after the conclusion of the Once Burned, and Lelia’s electrical powers and psychic telemetry are still blocked due to Vlad putting his fireproofing essence on her. She’s not happy because of the distance Vlad has placed between them, and after realizing she’s fallen in love with him, she decides to leave him to protect what’s left of her broken heart. Unfortunately, someone is after Lelia, and she finds herself on the run from an unknown foe.

Overall, I really enjoyed Twice Tempted. The highlight of the story is the continuing romance between Vlad and Lelia. I admire her emotional fortitude, making the decision to leave the man she loves because he refuses to entertain the possibility he will ever love her. Their goodbye scene wrecked me inside, making their eventual reconciliation all the more rewarding. I found myself completely engaged on an emotional level.

My only issue with the romance is the similarities of the sorta-love-triangle to Cat, Bones, and Tate from the original Night Huntress series. I understand the need to create tension and drama in the story, but having it come in the form of another suitor, Vlad’s second Maximum, was not the direction I would have liked. It just felt too similar to the original series, and although there are distinct differences, it irritated me.

The mystery of who is after Leila was fairly entertaining, even although I had pretty much figured it out well before the end of the book. The reveal in the concluding moments of the book was exciting, regardless of my correct suspicions.

Once again, I enjoyed Tavia Gilbert’s narration (see earlier reviews for more on my thoughts of Ms. Gilbert’s performance).

Story Rating: B+
Narration: A-