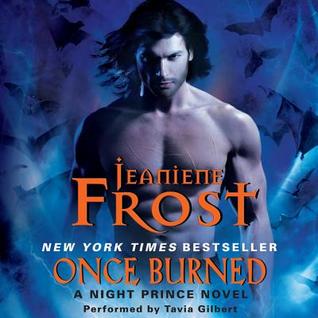 After a terrifying accident killed her mother and left Leila with bizarre electrical powers, she ran off to the circus and became Frankie the carnie worker. The electrical currents that run through her body make touching another human nearly impossible; however, if she does make connections, she will see a person’s worst sins and possibly even their future. When a dangerous vampire learns about Leila’s talents, he orders her kidnapped and forces her to help locate his enemy, Vlad Tepesh.

Vlad is no stranger to dangerous enemies, but when an intriguing female finds a way into his head and sees into his soul, he takes a chance and believes her when she says that she is searching for him against her will. Once he saves Leila from his enemies, his interest transforms into sexual desire, and he is confident he will have Leila in every way. While she turns his world upside down, he finds a way to help her accept her powers and reshape her into a powerful woman in her own right.

Once Burned is the first story in the Night Prince series, but falls as book 9 in the overall Night Huntress Universe. Although Cat and Bones and a few others make a brief appearance in the book, knowing the history of the Night Huntress world has little impact on this story. Once Burned can be enjoyed without having read any of the prior novels; however, I found it more enjoyable having witnessed Vlad in previous situations and adventures.

Overall, I really enjoyed Once Burned, mostly for the in-depth character development of Leila and her relationship with Vlad. Since the book is shared from the first person point-of-view of Leila (which was surprising to me since the series is named for Vlad), we spend a lot of time “inside her head,” learning her past, her fears, and her interests. I like that she’s a survivor, and rarely listens to that dark inner voice of doubt. She’s already been at her lowest point and decided to live and persevere, which gives her the toughness I love in UF heroines. She’s extremely interesting and not the least bit whiny. I enjoy how she tackles problems with her brain as well as her emotions, making her a well-rounded woman. And when she is with Vlad… let’s just say the pair burn up the pages with their sexual chemistry. But I also appreciate that they aren’t quick to fall in love and that Ms. Frost is staying true to Vlad’s character – not changing him in significant ways because of a woman. The changes are gradual, making the romance aspect more enjoyable. My only complaint of the writing is the excessive overuse of the word “loins,” which was mentioned at least five times in one sex scene and three in another.

The storyline following the attempts to discover who kidnapped Leila and wants to bring down Vlad is entertaining, but not as central as Leila’s own development. I have the feeling that this story will continue, as there is some level of uncertainty at the end of the book. Although I didn’t feel this story line was front and center, there was plenty of action to keep the flow moving at a steady and amusing pace.

As always, I find Tavia Gilbert’s well-executed performance highly entertaining. She finds new and mostly interesting voices for each character, although there were a couple similarities with some of the characters in the original series. I especially like her portrayal of Vlad, cheesy accent and all!

8 responses to “Listen Up! Vlad gets his own book! (#Audiobook Review)”