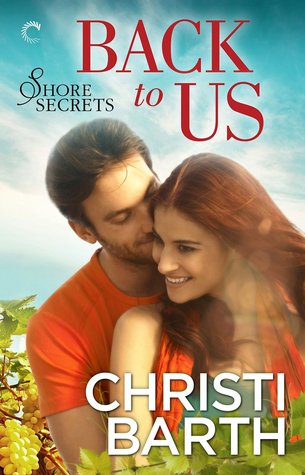 Back to Us
Author: Christi Barth
Reviewer: Nima
Rating: B+

Christi Barth is another new-to-me author and may I say, “So far, so good.”  After reading Back to Us, book three in the Shore Secrets series at Barth’s request, I wish I had read the first two.  The story can absolutely stand on its own and doesn’t require reading from the start of the series, but Back to Us is on the short side at under 300 pages.  I had the sense that reading Up to Me and All for You would have filled out the book with history and sub-text in a way that didn’t require more pages.

The story itself is somewhat unremarkable as romance novels go, friends become lovers, but Barth shines with her command of dialogue.  The banter was outstanding and I would even dare to compare her to Gilmore Girl’s Amy Sherman-Palladino.  I genuinely enjoyed phrases like, “male-patterned obtuseness” and “Latin’s a dead language—there are no emergencies in Latin.”  My favorite quote was, “Why can’t college kids ever find a bathroom…. That ought to be a half-credit class:  acceptable bathroom substitutes as an adult.  Woods?  Yes.  On the hubcap of a forty-thousand dollar vehicle? No.”

I will say that having grown up in California’s wine country, Back to Us sucked me in faster than it otherwise might have.  Although Back to Us was set in the Finger Lakes district at the other end of the country, it was easy to bring up memories of walking among the rows and rows of grapevines.  Also, there was a reference to hand folding a thousand paper cranes with twenty-seven steps each that had me cracking up.  My sister-in-law really did this for her sister’s wedding, folding about 500 that left her fingers bleeding.  A pure act of love, because who else but your sister or best friend would do such a thing?  Clearly Barth was pulling from enough reality to ground her characters well.

With such a compact story, there is only one real moment of stress and it doesn’t last long.  I liked that the book is upbeat and the characters proactive.  I liked both the main characters, Piper and Ward, and found neither of them to be whiny or annoyingly immature.  When it threatened, friends stepped in to verbally slap them upside the head—as they should.  Rather, Piper and Ward dealt with an appropriate amount of self-consciousness and pride for their age. These people do not wallow and do behave like adults.  So refreshing.  This is your August poolside read.

Ward Cantrell always went for the long shot. But that recklessness cost him his college scholarship and his chance to play pro ball, and—worst of all—it ended his relationship with the girl next door. Neither the town nor the girl has ever forgiven him. Now he’s taking one last long shot by opening a boutique distillery on the family farm he inherited.

Piper Morrissey spent high school in Ward’s shadow, but she’s come into her own in the years since. Maintaining her spotless image, and that of her family’s winery, is priority number one. Nobody knows that she still yearns for her golden-boy ex. Or at least they didn’t—until Ward agrees to sell Piper the land she needs to start her precious port line. The caveat? She’ll need to date him for one month.

Ward hopes a month is all it’ll take to convince his former sweetheart that while he’s changed, his love for her hasn’t. But when the chance arises to thumb his nose at the town that turned its back on him, he can’t afford not to reject Piper’s offer. Will that make her reject him and his love—for good?

Purchase Info:
Back to Us (Shore Secrets #3)

4 responses to “Review: Back to Us by Christi Barth”