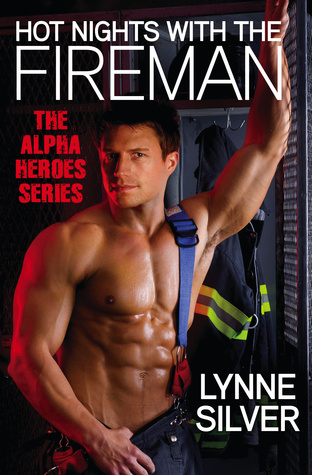 Lynne Silver is a new-to-me author.  Hot Nights with the Fireman is the first in her Alpha Heroes series. It’s the heated love story of fire fighter Jason Moore and ambitious public relations expert Valerie Wainwright. It should have been a quick read at only 65K words, but I found myself stopping constantly because of technical errors.

Typically when reading an advanced reader copy, there is an expectation that the manuscript being reviewed is not yet polished for publication. Allowances are made for missing commas and the odd word that’s gone astray.  Unfortunately, the ARC I pulled down from NetGalley, at the publisher’s request, read like an early draft, not a manuscript nearing public release.  The text was repetitive, contained continuity errors, and too many of the author’s metaphors where off the mark for me.  For example, in chapter six, Jason has been maneuvered into playing in a charity golf tournament. “He stood in front of her holding the large bag of clubs as if they weighed no more than a school backpack.” This was one of many metaphors that didn’t work for me.  If you’ve been around school backpacks in the last decade, you’d know that thanks to school shootings, most schools don’t allow students to go to their locker during the school day; they have to carry all their textbooks around from class to class.  They weigh a ton; so much in fact that a lot of parents have opted to buy their children book bags with wheels, like an airline pilot’s map case. What made this particular passage stand out so much for me, however, was that just a few pages later, Lance, the man Jason was golfing with, “…swung his club bag on to his back as if it weighed less than a school backpack.”  Find a new metaphor.

In chapter eight during a charity car wash, “He pulled her in closer, and the thin cotton of her tank top soaked up the water from his body.”  Later in the same afternoon when they have not left each other’s company, “His palms found her breasts over the silk of her dress…”  Which is it? Tank top?  Silk dress?  These errors, and others like them, made it difficult for me to fully appreciate the story.

I did like Jason, and Valerie was tolerable, but the story relied too heavily on their sexual chemistry rather than character development to build intimacy.  An intensity grew near the end that was very good, but the final ending cut off much too abruptly.  Overall there was the beginnings of what had the potential to be a very good contemporary romance, but as declared in the title, Silver was intentionally pushing the sexual angle.  It’s too bad for the characters and for this reader.

My Rating: D, Not A Big Fan

Everyone in Washington, DC, knows that when the heat is on, you call Valerie Wainwright. This brilliant, brassy PR maven can spin any hot scandal, and she’s never let a client ruffle her feathers. Yet when she agrees to teach DC’s bravest how to handle a media frenzy, she faces an entirely different kind of fire. Keeping things all business and no pleasure is far harder than she expected.

After steamy photos ignite the Internet, firefighter Jason Moore instantly goes from hero to bad boy. While he couldn’t care less about an online rep, he cares a lot about his job and saving lives. If Valerie can help clear his name, he’ll do what she says-even if it means forcing himself to keep his hands off her. But beneath Valerie’s cool cover, Jason feels a smoldering desire that lights his own. And this is one inferno he’ll definitely want to stoke . . .

4 responses to “Review: Hot Nights with the Fireman by Lynne Silver”