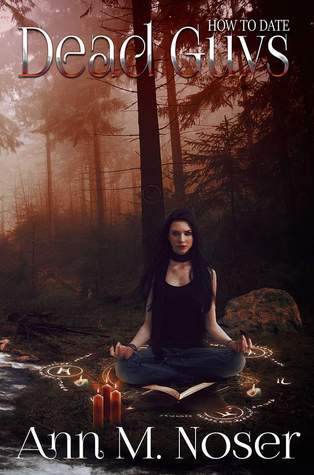 It had been awhile since I’d read a paranormal. I like ghosts. They’re cool. Witchcraft and rites? Yeah. I dig it. A good, strong female main character? All about it. How to Date Dead Guys, by Ann M. Noser, is a great read, and I’d say it’s appropriate for about 10th grade & up, unless you’ve got a mature one on your hands. I’m super close to classifying it as a young adult, but the author didn’t put it in any of those categories on Amazon.

Let me preface my ‘meh’ things about this title. I don’t read much young adult anymore, unless I’m in the mood for a good dystopian. This whole ‘new adult’ super-sub genre makes me shake my head because I *really* don’t see titles of this nature as targeting a different demographic than older young adult. A couple things bugged me. There was a plot hole, which irritated me. But, I’m told by friends who are more tech-savvy than I, it is possible for a phone to swim in owner’s pocket and survive. The pacing was…different. The beginning didn’t engage me very much, but it’s probably because I like to read characters different from myself, and Emma’s a lot like me (except I don’t see ghosts…much). Once we got to the paranormal part—actual ghost engagement—it was better. I actually cruised through the last half of the book rather rapidly.

I was impressed by the way the paranormal element was handled. Ms. Noser created a world where specific elements are necessary, and totally cleared up most of my ‘oh, heck no’ inner monologue before I even got there in my own head.

The dead guys. I found it really intriguing that Emma connects so deeply with each one of them in a different way. All the backstory for each one is well-fleshed out, and substantial enough I didn’t have questions. By the end, that is. After about the 60% mark, when I started in with my constant inner litany, ‘Wait, what? I need more info’, significant details were reeled out in a controlled and purposeful manner.

Emma Roberts is initially a little rich girl, and her Eeyore persona made me twitchy in the beginning. I very nearly didn’t finish this title, but then everything kicked into high-gear. Emma’s change was over time, and it appeared gradual to me. I enjoyed the way each Dead Guy she came into contact with had a lasting effect on her, much like people have on us. I would have liked to see a little more about Emma’s backstory, but it wasn’t essential and there are more titles in the series. While Emma ended up as a strong, independent woman, she didn’t start that way. And that’s okay. She got there. I wanted to see more respect, or maybe reverence from Emma regarding the use of witchcraft as well. It was stated she researched, but witchcraft, like any belief system, has rules and guidelines practitioners follow. If you’re looking for a new Sabrina the teenage witch, this is for you. If you’re looking for someone to replace the Charmed trio, notsomuch.

Overall, I was impressed by How to Date Dead Guys. I’m unsure, at this time, whether I’d like to read subsequent titles in the series. Right frame-of-mind is essential for me, and I suspect Emma will mirror my own emotional growth pattern a little too closely. I’ll have to decide later.

College sophomore Emma Roberts remembers her mother’s sage advice: “don’t sleep around, don’t burp in public, and don’t tell anyone you see ghosts”. But when charming Mike Carlson drowns in the campus river under her watch, Emma’s sheltered life shatters.

Blamed for Mike’s death and haunted by nightmares, Emma turns to witchcraft and a mysterious Book of Shadows to bring him back. Under a Blood Moon, she lights candles, draws a pentacle on the campus bridge, and casts a spell. The invoked river rages up against her, but she escapes its fury. As she stumbles back to the dorm, a stranger drags himself from the water and follows her home. And he isn’t the only one.

Instead of raising Mike, Emma assists the others she stole back from the dead—a pre-med student who jumped off the bridge, a desperate victim determined to solve his own murder, and a frat boy Emma can’t stand… at first.

More comfortable with the dead than the living, Emma delves deeper into the seductive Book of Shadows. Her powers grow, but witchcraft may not be enough to protect her against the vengeful river and the killers that feed it their victims.

Inspired by the controversial Smiley Face Murders, HOW TO DATE DEAD GUYS will ignite the secret powers hidden deep within each of us.

Purchase Info:
How to Date Dead Guys (Under the Blood Moon #1)

4 responses to “Review: How to Date Dead Guys by Ann M. Noser”