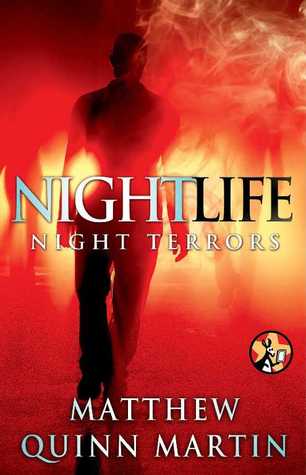 This full-length story was previously released in October 2013. You can read our full review using the link below:

It is not often, but every once in a while, Gikany and Una do not agree on a review.  You are in for a treat because we are split on our opinions about this novella in the Nightlife series.  Generally we both liked it, but Una enjoyed it more than Gikany.

This novella can be read as a stand-alone story although it is currently included in a boxed set, Night Terrors, with the first two novels.  In fact, it works as a decent introduction to the series.  Hazardous Material deals with an offshoot of the world and gives a deeper look into a mysterious entity from the first novel, Nightlife, the ever-allusive Division.  It does give a good feel for the series – the suspense and creepiness are evident as well as the mystery.

As stated, this novella is a little different.  It centers on Jarrod who finds an old arcade video game.  Una enjoyed this ghost-in-the-machine story, although whether it is a possessed video game or just diabolically clever programming is left for the reader to decide.  We watch as Jarrod finds it, plays it, and becomes a slave to it.  The story is creepy and suspenseful.  Una enjoyed the goosebumps it caused.  For Gikany however, it was just strange.

The various news clippings included during the novel gave some foreshadowing and clues, but we liked how they added to the overall feel of the novel without taking away from Jarrod’s story.  True to how Nightlife played out, nothing is as it seems.  Although this gives a deeper look at the Division, we still are not sure if they are “good guys” or “bad guys”, but we look forward to the next novel in the series.

If you enjoy suspense, a bit of creepiness and with a touch of horror, you may just want to give Hazardous Material a try.  It was delightfully creepy.

Una: A- Enjoyed A Lot
Gikany: B, Liked It

The second novel in Nightlife series was not quite what we were expecting, although it was not lacking in suspense and horrific monsters.  After the uber-creepy and gripping first novel, the second had a slightly different feel though Gikany and Una enjoyed it.

As the Worm Turns is, as the title implies, a transitional novel.  We learned more about the Division, Jack’s history, and a little bit more about the Order of Sormen.  The information gained would lead you to believe that we now know who is “good” and who is “bad,” but, true to form, nothing is clear-cut in this world.  It truly felt as if there are two books in this novel.  The first is concerned with Beth and Jack fighting monsters and avoiding the Division. The second is more about the politics within the Division while learning more about the monsters.

This was very different from the first novel, Nightlife.  Like the first book, it has multiple points of view, but there are more transitions between the different characters.  These frequent shifts in point of view contributed to the different feel.  It is still filled with horrific creatures preying on humans, the tension and anxiety of hoping Beth and Jack make it out of these conflicts alive, and the thrill of Beth and Jack staying one step ahead of the Division.  But, the frequent transitions made the story less suspenseful and less creepy.  We wished for more of Beth and Jack.  We wanted more of their viewpoints and their struggle.  However, the inclusion of different viewpoints did give us a new perspective on the creatures.  The story of Brigid was compelling and tragic.  It truly enriched the story.

Though very different from the first novel, Nightlife, we enjoyed As the Worm Turns a lot.  This series continues to build on itself and delve deeper into the darkness of the world.  Considering the cliffhanger ending, we are eagerly awaiting the next creepy, nail-biting ride.

Three amazing horror tales in one chilling bundle…the only thing you won’t fear is the price!

Enter a world where the streets crawl with unimaginable demons, and a monster can lurk behind every friendly face. Matthew Quinn Martin first terrified horror fans with Nightlife, the captivating story of two unlikely monster hunters determined to save the city of New Harbor from the Night Angels—bloodthirsty creatures that feed on the forgotten. Jack Jackson and Beth Becker are among the few who can see these creatures for what they really are, but as they hunt the creatures, a mysterious organization known only as The Division is hunting them.

In the novella Hazardous Material, we get a glimpse of The Division’s origins and aims when a young man stumbles onto a long-abandoned video arcade—which three decades ago was the site of the largest mass shooting in New York history—and unwittingly uncovers a relic of unimaginable power and mind-altering terror.

And in the never-before-released As the Worm Turns, Jack and Beth are back, along with their faithful dog, Blood. For months they’ve been keeping just one step ahead of The Division, whose enigmatic leader has been pursuing them with the single-minded obsession to capture them by any means necessary. But as Jack and Beth continue their quest to rid the world of the creatures once and for all, they find themselves facing off against something even more terrifying than the Night Angels––something that could hold the key to humanity’s salvation…or its doom.