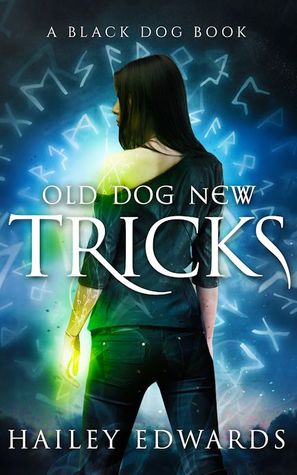 *gasps like fish-out-of-water* Well, that was certainly unexpected. In a good way. Fans of Hailey Edwards’ Black Dog series will certainly want to pick up Old Dog, New Tricks. This little run of the series—Theirry’s story—does come to a close here. For now. Looks like we’ll have opportunity to keep up with Theirry and Shaw because Mai gets her own book next!!!! *throws confetti*

I kinda don’t know how to write this review. I want to just say, “Go forth and read the Black Dog books. Thank me later, you will.” They need to be read in order, and Ms. Edwards’ website and her Amazon page have that information. I also feel that pretty much anything I have to say that is NOT spoilerific is covered in the blurb. But, I have the ability dig deep, as it were, and look at the relationship development and all the emotional growth. Because, even though there was a lot of action in Old Dog, New Tricks, what drew me in was the character growth.

So, Theirry starts off super irritated at Macsen, her dad. Readers of the series will be all, “Oh, yeah. She totally has that teenager eye-roll going when it comes to him.” Throughout the story, she’s actually forced to work with Mac in order to get Shaw back before he flips the incubus switch and goes totally feral. It was actually pretty awesome watching Theirry and Mac develop a relationship after so many years of tempore nullam, no contact, it seems like Mac is here to stay. Things were initially pretty dicey—Mac pulled some low blows, and Thierry was less than forgiving regarding the past—but with a common goal in mind, they were able to power forward and managed to force a tenuous relationship that will continue to need work.

First, I want to say that I missed Shaw, and I thought there was too much Rook. I’m just being selfish, though. Rook rubs me the wrong way, and I really adore Shaw. Realistically, Old Dog, New Tricks was complete *exactly* the way it was written.

I was pretty impressed by the change in Mac. Being from Faery, he doesn’t know the ‘rules’ of relationships, and needs to learn stuff in order to get along with Theirry and her mom. Some beautiful moments in here, folks. Not only does Mac learn to get along, we watch him develop the protective dad instinct. *raises eyebrow* Possibly somewhat overprotective dad instinct. Mac also passed along some of his knowledge—most probably stuff Theirry would’ve learned by now if Mac had been any part of her life, and she’d been raised by him, or in conjunction with regular contact with him. It seemed really natural, the way they fit together and worked together. I thought it was a shame it took this kind of chaos to actually bring Mac out of hiding.

While Mac grew a lot, Theirry seemed to have huge character development. I think Ms. Edwards realistically portrayed the manner in which a young adult would react to an absent father ‘magically’ appearing in her life. It’s not going to be instant besties, right? We get to watch Theirry’s thought process as her thinking changes, too. Absolutely delightful. Oh! Theirry is still the same smart-mouthed, outspoken marshal she was in the other books. Seems that now she’s got the power to back up her mouth, though. Which I like a lot.

While all of the Black Dog titles have been difficult to review without spoilers, I think Old Dog, New Tricks was the most difficult. Readers need to experience the resolution of the series plot arc for themselves; everyone needs to have a huge grin across their face, like I did near the end. The Theirry/Shaw plot line seems pretty resolved with a HEA, but I look forward to seeing where they head in the future through other titles in the Black Dog-verse.

While Thierry is away, the Morrigan will play. Snatching the crown from her daughter-in-law’s head wasn’t the motherly thing to do, but Thierry doesn’t mind trading the throne in Faerie for the ratty couch in her Texas apartment. The old crow is welcome to it. But ruling one world is not enough. The Morrigan wants an all-access pass to the mortal realm too.

An attack on the marshal’s office leaves Thierry shaken…and Shaw missing. Now the fight brewing since Thierry took up the Black Dog’s mantle has landed on her doorstep, and the only way to save the man she loves is to defend the title she never wanted.