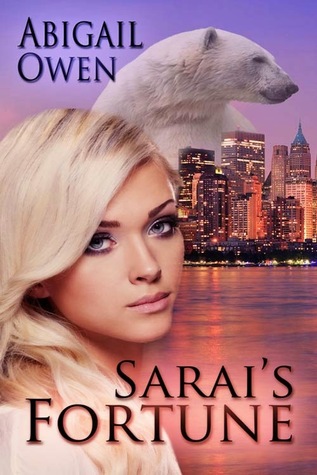 Sarai’s Fortune is the second novel in the Shadowcat Nation series.  Gikany and Una liked this novel more than the first novel and look forward to more in the series.

First, the world-building was much better.  We were able to stay fully immersed in the story while learning about the world at the same time.  Through Sarai, we learned more about the Kuharte, those shifters that have a little extra supernatural ability such as healing, seers, etc.  Zac introduced us to the polar bear Timiks and culture.  But this was much more seamlessly woven into the story and less noticeable.  Plus it is interesting to see how this new Shadowcat Nation is still growing and changing.

Second, we enjoyed the slowly burning romance between Zac and Sarai.  Although their story didn’t go in the direction we anticipated, we enjoyed the journey.  Zac and Sarai are bounded by loyalty to their individual groups, but they find a way to be together.  Their communication and their give and take as they danced closer to each other was captivating.

Lastly, we enjoyed learning more of the overall plot against the Shadowcat Nation.  We were introduced to an overall ‘big bad’ that we assume will continue through the series.  However, the story of Kyle was resolved and we liked how poetic justice was served.

All in all, we liked Sarai’s Fortune and look forward to continuing the Shadowcat Nation series.  If you like slower paced but action filled paranormal romance, you might just want to pick up this new series.

Zac Montclair’s first priority is to protect his people. With the escalating war between factions of shifters over land and resources, he has agreed to an alliance between his polar bears and the Shadowcat Nation of cougar shifters. But the treaty comes with a condition…he must accept one of their Seers into his Timik and put her under his personal protection.

Sarai Bouchard doesn’t need her supernatural gift to know that Kyle Carstairs’s obsession with controlling her ability will eventually result in her misery and demise. Her power is essential to her people’s survival, so when Kyle goes rogue, she’s sent to Zac Montclair to keep her safe. However, her visions reveal that while staying will lead to their becoming lovers, it also leads to his death. Leaving Zac will result in her own.

If Sarai can’t find a way to change the future, she will be forced to choose…save her lover or save herself.