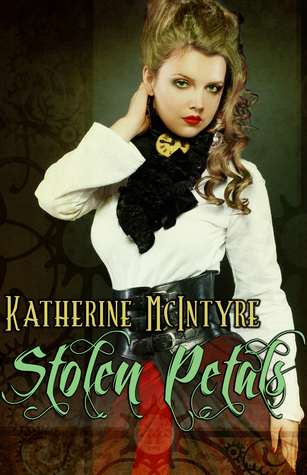 Viola Embrees runs a respectable bar, but makes her fortune as the Brass Violet, a clever bounty hunter. Unfortunately, Edward Van Clef, aka the Fox, has stolen her bounty out from under her a few times. So when the infamous Fox approaches Viola with an offer to share a bounty, she knows she’ll have to stay a few steps ahead of him to keep him from double crossing her. What she doesn’t expect is to fall for Edward’s charms along the way.

Stolen Petals is a charming, short novella, set in an alternate time. Although the author labels the story as steampunk, it’s not overly techno-driven, and the story lacks much of the steam-powered gadgets I look for in a steampunk title. The story read more like alternate timeline of some older period, mixed with some modern language and tech. It’s not bad, but if you are looking for a gadget-heavy world, you won’t find it here.

I like Viola and really wanted to learn more about her past and how she came to be a bounty hunter and bar owner. The author does a good job of sharing enough hints about her past to give Viola an intriguing persona, and we understand that she’s had a rough time of life. This is enough to round out her character and pique my interest.

Edward is even more of a mystery since the story is never shared from his POV. We only have Viola’s impressions of Edward and his reputation as the Fox. And since her perception of men, and Fox specifically, is a bit tarnished, it’s tough for me to trust his character.

Their romantic journey is short; the book is only 65+/- pages, which doesn’t leave much time. I felt Viola gave her trust to Edward way too easily, but there isn’t space to do otherwise and still reach the HEA by the end of the story. It is sweet and hopeful, but not enough to completely win me over.

Overall, Stolen Petals is an enjoyable, albeit short, read. The story and romance are both entertaining, yet suffer a little under the brevity of the book. If you are looking for a quick escape for an afternoon, Stolen Petals may be the perfect journey away from the hustle and bustle of everyday life.

One man has swiped bounties from Viola, the Brass Violet, for years. Longstanding rivals, they’ve only had brief encounters, and if she had a choice, she’d avoid him entirely. When he saunters into her bar with an offer to work together on a job, the proper response would be to shoot him down and send him back to Shantytown. However, curiosity’s a wicked beast, and Viola needs to know why, after so many years of stealing her marks, he’d approach her now.

The man is insufferable, annoyingly cavalier, and tends to stir up memories she’d rather forget–but she needs assistance on this job and he’s offering aid and blueprints which could cut their work in half.

Given the intense way he looks at her though, working together isn’t all he has in mind. Van Clef is known for his persistence and, with his charm, he wins women over effortlessly. Viola’s not so easy though–she’s wise to his tricks. But if he wants to play the game, she will gladly rise to the challenge. By the end of this bounty, she’ll be the one leaving him in the dust.