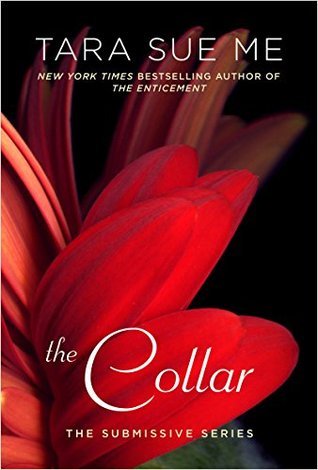 The Collar
Author: Tara Sue Me
Reviewer: VampBard
Rating: B

The Collar needs a couple trigger warnings, though. One of the most painful things for me is to read about cancer stuff. I struggle and cling to Mr. VampBard like there’s no tomorrow when I read anything remotely mentioning cancer. In this title, one of the main characters has a parent dying from cancer. Not to leave the emotional smoking gun unloaded, we’re also hit with miscarriage (at 19 weeks), and the hell it plays on a relationship. Because of the cancer thing, I seriously thought about putting down The Collar, but I was already too invested in Jeff and Dena to not read the ending. I did read everything pertaining to Jeff & Dena’s relationship. I skimmed over the cancer stuff (which wasn’t much). With regard to miscarriage, it plays a significant role in the novel, and isn’t something that can just be skimmed over.

Jeff is a typical, bossy Dom. I love that about him. Part of what drew me to him as a character is how into Dena he continues to be. After several years apart, Jeff and Dena are forced together due to a creepy situation. Dena needs him, which feeds Jeff’s Dom-ness. While he struggles to control himself, and keep distance between himself and Dena, it’s a constant battle. The Collar is told from both Dena and Jeff’s POV, so we get to see what’s going on in both their heads. When the story begins, Jeff needs to head out of town to deal with a family thing. He struggles with leaving, but thinks it’s for the best. He sees Dena socially, in their BDSM club, and it’s not a pretty picture in his psyche. As the story unfolds, Jeff’s Dom-ness is definitely front-and-center, even though he’s trying to keep it under-wraps. One thing I learned from Jeff’s characterization was keeping true to one’s self is important for all those we care about. If we can’t show who we are to those we love, it really isn’t a two-way street.

Dena, a senator’s daughter, remains actively involved in the local BDSM community, although she rarely finds the pleasure she desperately craves. Dena is a lawyer in the prosecutor’s office, and she’s really good at her job. The lawyer bleeds into her ‘playtime’. She’s irreverent, and cocky. I like her. But with all the things going on in her life, she needs one area in which she can let go of the reigns and simply feel. That hasn’t really happened since Jeff took back his collar several years prior. *gasp* It’s one of those stories! Where they’re getting back together. Mmmhm. Dena has a lot of baggage, least of which is her senator father that feels she needs to be a judge or something. *rolls eyes* Dude. Get a life. She needs to do what makes her happy. Not only does Dena have to deal with an jerk-face dad, working through issues with Jeff—she has a stalker.

I really did like The Collar by Tara Sue Me. I definitely recommend it to anyone that’s been reading The Submissive Series. It’s important to the forward movement of the series arc, and we see other characters, such as Daniel and Julie (from Seduced by Fire, Partners in Play #1—Now listed in The Submissive Series as #5, per author’s website), as well as Cole, Sasha. We also see how Nathaniel and Abby figure things out and just make everything work. I saw this prominent couple in the series as more parent-like, being the ones everyone else turned to, to problem-solve. The play scenes were super hot. Not gonna lie. Snag yourself a tall, cold something and turn the fan on high. I felt the scenes from Dena’s POV were more powerful and emotionally-charged. I’m looking forward to getting back to Nathaniel and Abby’s story in The Exhibitionist, slated for release November 3, 2015.

Nathaniel and Abby are struggling to navigate the challenging waters of their own relationship, when they get a surprising phone call from their partners in play, Dena and Jeff, who are in need of a helping hand…

Except, as the years have passed, their blazing connection has proven difficult to maintain. Dena and Jeff have a history they’d rather forget, but Dena can’t let go of the past, and Jeff is ready to move across the country to give her space. Now, to save their passion, they’ll have to rediscover what it means to trust each other—and give themselves to each other completely…

Purchase Info:
The Collar (The Submissive #5)

2 responses to “Review: The Collar by Tara Sue Me”