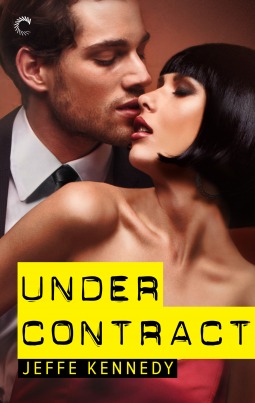 It is not Celestina Sala’s best day. As a waterscape landscaper in the middle of a California drought, she lost her job. Everything has gone bad for her lately, and losing her job was the proverbial straw. She’s in debt and living well beyond her means; however, it wasn’t a life of excess, but rather a series of unfortunate events that landed her there. Now she has to figure out what is best for herself and her two nieces she is raising alone.

Ryan Black, an eccentric tycoon, thinks it’s serendipitous seeing Tina the day she loses her job. When she did work for his company a few years ago, only her wedding band kept him from acting on his desires for her. Now she’s in trouble, and he’s got a solution to both of their problems: he’ll pay her to be his sexual playmate.

The plot line for Under Contract isn’t necessarily new, but how main character Ryan views his “payment for services” adds an interesting and unique element to the story. This story is not that of Indecent Proposal. This is a man who wants a woman, but discovers she’s not in a place in her life where he can take her to lunch and sweep her off her feet. Ryan is not black and white and doesn’t see his proposal how Tina does: prostitution. Rather, to him it’s a win-win, and no one needs to label it.

What makes Ryan’s proposition palatable is that 1) Ryan intrigues Tina, 2) he gives her complete control, and 3) Tina’s problems are serious and real. She’s borderline desperate. Ryan makes her see the truth of her situation, which is utterly dire. The author does such a fabulous job outlining Tina’s financial troubles that I felt her desperation and was stressed out. So when Ryan makes her a deal, I love Tina’s honest reactions ranging from disgust with herself for being a prostitute to being seriously turned on by Ryan. She’s out of her league and knows it, but also realizes she’s got to do something to change her situation. I’ll admit feeling a bit uncomfortable in my skin because Tina feels that way. Ms. Jeffe doesn’t sugar coat her story or the proposal: it is prostitution, but Ryan wants to possess Tina and sees it as a means to the end.

Under Contract explores a darker side of sex, but it isn’t overly graphic or extraordinarily kinky. Ryan likes to control and enjoys his games, all the while helping Tina accept and embrace her own desires. While the money part of the equation causes some problems, I feel the author does a fantastic job moving from the initial proposition into a true romantic relationship, without muddying the waters unnecessarily. Having the story shared from both Tina and Ryan’s point of views allows the reader to better understand both characters’ motives, thoughts, and feelings, making the entire story all the better.

In the end, I really enjoyed Under Contract. While the initial premise was a bit uncomfortable, the author does a great job growing the relationship and showing how Ryan doesn’t see it as buying sex, but as a means to possess the woman with whom he is obsessed. Ms. Kennedy takes the time needed to grow the relationship and develop the characters, giving the book a lot of emotional depth. It’s not a cliched Pretty Woman. It’s about learning to love and trust again. It’s about forgiveness. It’s about allow one’s self to indulge in the dark side of sex for the pleasure and release. Ryan and Tina play well together, and while their journey isn’t completely smooth, each brings out the best in the other.

Although part of a series, this book is a standalone story and romance.

Ryan Black has admired Celestina Sala from afar for years, her lush body and sensual nature calling to the dominant in him. For just as many years, Celestina was off-limits—married, proud and self-sufficient. But all that has changed, and now Celestina is in debt and in need…and available. Ryan proposes a contract: he’ll pay off her debt if she gives herself to him in bed, yielding control in exchange for the pain and pleasure he’ll bring them both.

There are words for women who take money for sex, and none of them are nice ones. Celestina never thought she’d have to sink this low, but giving up control sounds more enticing than ever before. And suddenly it’s not about having to give in to Ryan. It’s about wanting to.

But when Ryan’s dark past comes to light, they may both be in over their heads. The terms of his contract say her body is his…but her heart may be another story.

One thing is for sure—now that Ryan has Celestina, he can never let her go.

Purchase Info:
Under Contract (Falling Under #3)

5 responses to “Review: Under Contract by Jeffe Kennedy”