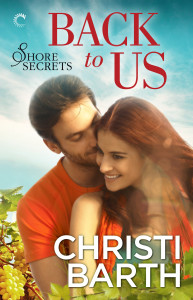 “How about we save costumes and toys until we have just regular sex once?”

Ward slapped his hands together, as if wiping her request off of them. “Sorry. I can’t downgrade my performance to regular. Can’t dial it back to anything less than mind-blowing.”

Piper burst into laughter. They’d survived the serious talk, cleared the air and come out the other side. Ward definitely had the right idea for the evening. Relaxing with him was the perfect way to end the day. It didn’t take any effort at all to picture them just like this three months in the future. Or three years. It made for an enticing vision. An aborted dream come true. One she’d given up on, but always craved. “How about we start with a really big pizza, and go from there?”

“Already ordered on the way over here. Sausage, pepperoni and mushroom, like always.” He looked at his watch. “Should be here in ten minutes.”

Just enough time to put into action her put-more-effort-into-this-relationship plan. Well, it was more of a single bullet point at this moment, because she had no plan. Yet. But she had to start somewhere. So she crooked her foot around Ward’s hip and dug in, urging him closer. It didn’t take much. With one foot on the floor, he scooted up to prop himself alongside her. Propped his head on his fist and threw a leg across hers.

“I’ve got an idea how we can kill those ten minutes.”

He rubbed the cold bottle down the length of her arm, sprouting goose bumps in its path. “I’ve got one, too. Want to compare?”

“Not really. I’m not in a talking mood anymore.”

“Makes this a red-letter day.” The damp bottle moved to the sliver of belly exposed between her top and her skirt. Ward’s leg was the only thing that kept her from bowing off the cushions at the sensation. “Since when doesn’t Piper Morrissey have a stream of thoughts coming out of her mouth?”

“Since you drive them all out of my brain.” The sentence ended in a gasp as his tongue trailed across the line of condensation left by the bottle. “Ward, this isn’t fair. I’m trying to put the moves on you.”

“There’s time enough for you to get a turn. Later.”

He did some swirly thing with his tongue in her belly button that unfurled a coiled spring of lust that ran from between her legs out to the tips of all four of her limbs. Piper scratched her nails across his scalp. Clenched her hands in two fat fistfuls of hair and held on tight.

One more swirl. This time Ward paired it with a sweep of his hand up her torso to land on her breast. Well, she wished it was right on her breast. The layers of top and bra that separated her skin from his hand might as well have been the Berlin Wall. Impenetrable. Frustrating. Ten minutes was plenty of time, given how hot they both were for each other. Four freaking seconds of foreplay and Piper was ready to explode.

There was no reason to play coy. No reason to wait. No reason to drag out this sensual torture. Right now, Piper couldn’t think of a single reason why they’d even waited this long. Sex was a logical and normal thing for a couple to indulge in on a random Wednesday night, right? As obvious a next step in the evening as the pizza they were expecting.

“We should just do it,” she announced. “Take the edge off.”

He nipped at her waist with his teeth. “Nope.”

Since when was it this difficult to talk a man into sex? Had hell frozen over? Piper tried again. This time she stuck her hand down the collar of his shirt to skim lightly along the warmth of his back. “We’re primed and ready. Forget foreplay.”

“Careful.” Ward lifted his head to smirk at her. “A statement like that’ll get your membership in the sisterhood of women revoked.”

Of all the times for his stubborn streak to surface! “I’m serious. Let’s do it now, fast and hard. We don’t need to make a big deal out of it. Think of it as a tension release.”

“It won’t work. You might as well give up. I won’t be rushed.” He caressed her breast, molding it in a series of slow squeezes. “And I intend for it to be a very big deal when we have sex.”

The problem was that Ward had the upper hand. Literally. Since he was on top of her, she couldn’t shift enough to tease him in return. To fire him up to a point of no return. All she could use was logic. Which was never as surefire a method of persuasion as naked touching. “We’re not breaking new ground here. We’ve done all this before. Ten years ago. This is a rerun, not a splashy premiere.”

“We’re not the same people now that we were as teenagers. Everything about this experiment, about the way we’re dating today, is different. Brand new. We’re building something this time around. I hope.”

Piper’s heart melted. Just puddled right off the edge of the chaise onto the floor. “I hope so, too.”

“Then respect the process. You’re gonna need to be patient.”

That word—need—was exactly her current predicament. “Okay, but I don’t need frills and foreplay. I need you. I need you a lot. I need you now.”

“Babe, that’s the tip of the iceberg as far as begging goes.”