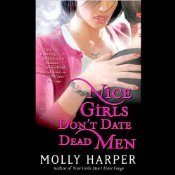 Nice Girls Don’t Date Dead Men picks up the story of Jane Jameson’s newly turned vampire life shortly after the conclusion of the previous book. Listeners discover that Jane’s BFF, Zeb, and his beloved, Joelene, are getting married, and Jane is the maid of honor. We also discover that Jane and her mom have found some sort of peace, but that her sister is suing her. The book generally follows the day-to-day going-ons of Jane’s crazy life, tossing in Jane’s familiar humor and quirky observations.

Overall, I enjoyed the second offering in the Jane Jameson series. I love Jane’s snark and the general humorous mood of the story. Jane’s life is one crazy event after another, and generally, she handles everything with a sense of humor and a few tears. However, both Jane’s and Zeb’s family are overly cruel, making some of the story difficult to digest with the lightness intended in the story. Jane’s grandmother and sister are outrageous and mean. The same goes with Zeb’s mom, Ginger, who does everything and more to get Zeb and Jane together. It got to the point where I could no longer listen to her manipulations; they went beyond outrageous and straight into despicable. Although Jane handles herself with her typical sarcasm, it got to the point of annoying, and I was frustrated at how much Jane put up with.

Don’t get me wrong, I really did like the book, and fortunately, those scenes weren’t as numerous as the good ones. I did like seeing Jane learn how to maneuver in the vampire world and learn to stand up more for herself. I also liked seeing her somewhat odd romance with her sire Gabriel evolve and grow. My favorite parts of the book were those interactions between Jane and her boss/surrogate-grandfather, Mr. Wainwright. Additionally, I found Dick Cheney to be my favorite character as he matures just enough to be lovable but retains his core personally.

Amanda Ronconi turns in another excellent portrayal as Jane, along with the host of other southern characters. She nails both the charm of a southern lady, as well as the guilt of the southern mama. And the few things that slightly bothered me in her performance during the previous book didn’t seem as noticeable in this story.

Nice Girls Don’t Date Dead Men is an entertaining, light-hearted story, perfect for enjoying during the lazy days of summer.

My Rating: B
Narration: A-