Audiobook review: Up From the Grave

Up From the Grave #Audiobook Review 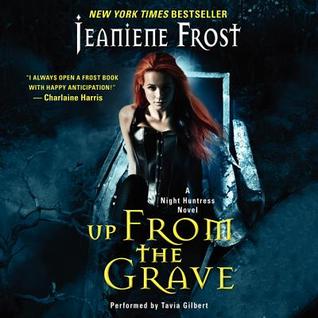 I have to say that I went in to Up From the Grave with a bit of apprehension. When initially starting the series, I had mixed feelings, reaching a low back with the fourth title; however, the last two books in the Night Huntress series have been fabulous. When a fellow reader mentioned the reasons why she didn’t care for the final book as much as earlier titles, I was worried because her issues were the biggest reasons I had problems with the earlier titles. However, even with those concerns going into the final book of the Cat and Bones series, I am happy to report that I thoroughly enjoyed Up From the Grave.

The book opens shortly after the conclusion of the sixth Cat and Bones book, and overlaps a bit in time with the second Night Prince book (the Vlad-centric spinoff series). Cat discovers that her former teammates and good friends are missing. When she tries to uncover the truth from her current nemesis, Jason Madigan, she finds out that they are listed as killed in the line of duty, but Cat knows something isn’t quite right. As Cat and Bones dig deeper, they begin to uncover a horrible plot that could spell the end of vampires and ghouls alike.

Up From the Grave is the final story of the primary Night Huntress series, which focuses on Cat and Bones. Overall, I enjoyed both the one-book story and the conclusion of the series. Ms. Frost does a great job balancing the need for a solitary plot line with the desire for an all-encompassing wrap up of the series. All of the major characters make appearances, and the outstanding storylines come together for a solid finish. But that doesn’t mean we don’t meet new players with the possibility of future titles. However, Ms. Frost makes it pretty clear that she’s closed the doors on Cat and Bones, for now.

The book focuses on Cat’s need to bring down the nefarious Jason Madigan, who took over the secret government agency in charge of paranormal disruptions. We discover that Madigan is up to some really nasty stuff that could bring about an unwanted war between the vampires and ghouls. There are a few twists and turns in this plot line, some of which I figured out early on and some that came as a pleasant surprise. I like that the bad guys are bad, making them easy to hate. However, not everything is black and white, which is most evident in the relationship Cat has with her deceased uncle, Don. There are also a couple of extremely emotional scenes, and although I just knew everything would be okay, I still got choked up.

As always, I’m impressed with Tavia Gilbert’s performance. I feel like she changed up the voice of at least one character, but for the better; and it really could be all in my mind that it was different (since it’s been a few books since I last heard some of the characters). She also successfully tackles a child’s character, which can really be hit or miss when it comes to an adult narrator. However, I just love Ms. Gilbert’s interpretation of Cat and Bones, and will miss hearing them.

In the end, Up From the Grave is an enjoyable story, providing a satisfying and unique ending to the Night Huntress series. It’s not a perfect story, but it is perfect for Cat and Bones, and Ms. Frost manages to wrap everything up in a mostly happy bow. This is definitely a must read for longtime fans of Cat and Bones.

Story Rating: B+
Narration: A-