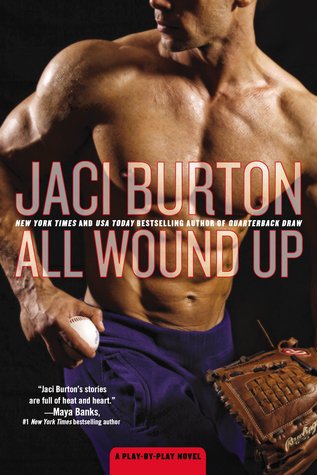 Ok, this is book ten.  Burton successfully does what she’s done the entire series.  All Wound Up continues to deliver what her readers have come to love and expect with this series. More of the same isn’t a bad thing, especially if this is your reading groove.  For me, however, the Play-By-Play series has become formulaic.  Like other books in this series; All Wound Up is predictable with an anti-climactic finish.

There’s nothing especially original about this plot, it’s the “nobody is good enough for my daughter” plot.  The fact that the couple in this rendition are a pro-ball player, Tucker, and a doctor, Aubry who happens to be the only daughter of the team’s owner, doesn’t make it any more enticing except on some fantasy level that appeals to those who wish they were rich and famous.  Ultimately, the problem isn’t the problem.  That’s brought out into the open in a matter of a dozen pages.  The problem is how Tucker and Aubry handle the problem.  If they’re entirely immature, no one would buy that they’re successful in their chosen, demanding careers.  If they behave completely mature then the conflict really wouldn’t exist at all.  Burton does achieve a realistic balance between the two as they resolve their issues. And then it ends. The end.  I liked Aubry and Tucker enough to want more for them and from Burton.

Where there could have been more story, there is a lot of sex, I think more so than some of Burton’s other books—which is saying something.  In the beginning, this seems to be the book’s entire focus.  If we weren’t already in fantasy territory with an incredibly hot major league baseball player and a seemingly endless supply of money and social connections, eight orgasms on the first date is probably the best give-away.  Even for a pro-athlete and a doctor who maybe knows something anatomical that the rest of us aren’t privy to, eight seems to belong to the paranormal world where different rules apply to vampires and werewolves.  To quote Rory Gilmore, “What? Were B-12 shots involved?”  Aubrey’s best friend Katie sums it up well when she says, “You get off, he gets off, there are no emotional entanglements to clutter up your already busy life.  Everyone’s happy.”

Unfortunately it seems that a lot of contemporary romance is taking this concept as basis and adding the romance in later.  I miss some of the anticipation and build up that comes from having the romance first.  Sex and romance are not the same thing.  There really isn’t any romance that comes later either for Tucker and Aubry.  The climax of All Wound Up story is handled with a couple of conversations.  There are no grand gestures, nothing went wrong in their respective careers that the other could support and help them through.  In fact, their relationship thrives on their independence from each other, really only coming together to have sex. To me, that isn’t actually a relationship. I found that to be a disappointment in what was supposed to be a “romance” novel.

Tucker Cassidy is going through a slump—both with his curveball and in his dating life. After having a painful altercation involving his ex-girlfriend’s knee, the professional baseball player is convinced things couldn’t get worse…until a gorgeous doctor comes to the rescue at his most embarrassing moment.

As the daughter of the owner of the St. Louis Rivers major league baseball team, Dr. Aubry Ross has been around jocks all her life. She knows the ins and outs of all their games, and she isn’t interested in playing.

When Tucker repeatedly lands in the hospital where she’s working, Aubry starts to think he’s getting injured just to see her. Tucker is both funny and sexy, and Aubry is pleasantly surprised to discover he actually respects her job.

But when her father disapproves of their relationship, will Tucker let threats of a trade get in the way of a game-changing love?

One response to “Review: All Wound Up by Jaci Burton”