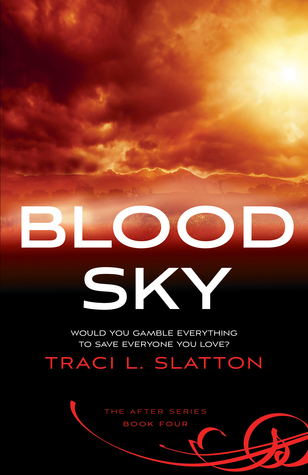 When we started The After series, it was a trilogy, but as book three ended, it was obvious that the trilogy had turned into a series.  Gikany and Una thought that the fourth book, Blood Sky, would be the end of the story.  It is not; it is a transitional novel that sets up another novel.

Blood Sky flowed well even though it languished a bit in some parts.  Although many of the stops along Emma’s journey were necessary to the overall plot, some of them could have been cut.  We understand that in the After, they are traveling by horse and it takes a lot of time to get across long distances.  We do not need it illustrated in such a detailed manner.  It would have been nicer if some of the traveling were summarized while the story moved more quickly to the next milestone.

This novel began and ended with Emma in the same place.  That is not to say that it was not engaging and that nothing happened.  Along the way Emma does confront Haywood and, though it isn’t surprising how it ends, there is some hope for Emma and her relationship with her children.  We continue to hope that if Emma can complete the mission she has chosen, she will succeed in eradicating the deadly mists from the Earth.  We wish that Emma would start to toughen up a bit more in her thinking.  In the After, she has got to understand that she does have a choice.  Even when the choices are between awful and horrible, there is still a choice.  Emma needs to learn to accept the responsibility for her choices and stop claiming she didn’t have a choice.

One aspect that we continue to struggle with is Emma and her two love interests: her husband Haywood and her seemingly soul mate Arthur.  We struggle because Haywood continues to demonstrate he is a selfish and cruel man, even though we can understand his heartache at Emma’s adulterous relationship with Arthur.  Although we can see that her relationship with Haywood is over, we don’t quite understand why she hasn’t had a discussion with him regarding how to end it and keep a relationship with her children.  We dislike Arthur and can’t seem to understand why Emma is compelled to be with him.  Arthur is arrogant and deluded.  We actually wished for another man to come along and be a better fit for Emma because all Emma and Arthur have is overwhelming lust.  Hopefully we can see more in the next novel of true love between them and not just an animal attraction and need.

We want to continue the series even though we were a bit disappointed in how little the overarching plot progressed in Blood Sky.  Hopefully more happens in the next book and the series does not drag on for more books than necessary.  We want to watch our team get closer to the goal of eradicating the mists, seeing Emma resolve her love and family issues, and check in with the supporting characters that we have come to love (and we hope and pray they will make it).  The After series, despite its soap opera type drama, continues to be an intriguing post-apocalyptic adventure and romance series.

In a time of apocalyptic despair, love is put to the test… Deep in the badlands of Outpost City, in the Dark Horse saloon, a poker game is being played. The stakes are life and death—for the world.

What can Emma afford to lose? Will she gamble on herself, or on Arthur?

Will love find a way when the apocalypse closes in? A mystical odyssey, a haunting love…