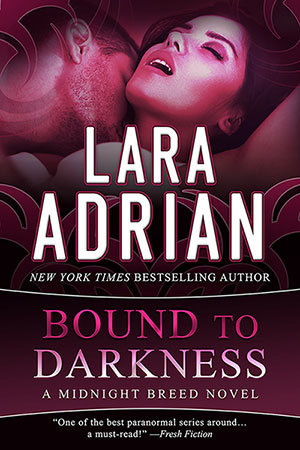 Bound to Darkness continues the story arc, which was first introduced in Edge of Dawn, of a world where vampires (Breeds) and humans exist side by side. As the thirteenth title in Ms. Adrian’s highly successful Midnight Breed series, Bound to Darkness is not the place for new-comers to begin. While the author does a good job bringing in enough world-building and background to keep readers up to speed, I feel that much of what makes this series so good would be lost if one started with this book.

This time around, the romance focuses on Carys Chase (daughter of Chase and Tavia) and Rune (cage fighter), both of whom were introduced back in Edge of Dawn. The pair has been a couple for just under 2 months, which puts the entire time line since Edge of Dawn at about the same. It’s hard to believe so little time has passed over the course of three books and two novellas. Since the pair has been together for a few titles, I felt the quickness of their romance and falling in love worked better than had they just met.

I enjoyed Bound to Darkness for several reasons, most of which stem from this book being a bit different from prior titles. When misunderstandings could have caused problems for the couple, the strong, smart characters utilized the seeds planted along the way to figure out the truth. I can’t tell you how refreshing this was. Other factors that made this a good book include: 1) the couple was together in the previous titles. They are already in love and the focus is more on shedding the past and growing into the person each was meant to be. 2) The “I’m not worthy” trope, which is one overused in the Midnight Breed series, isn’t a factor in this one – in fact Rune FIGHTS for Carys and to be with her. Even after things turn south, he never gives up the idea that eventually they will be mated. 3) Carys kicks major butt and Rune supports her fully. I LOVE how totally badass Carys is and that Rune doesn’t pout or whine about it.

Generally, the sexy times are hot and heavy, but never overdone. There is a good balance between the smex and action. And dialogue… finally we have a couple that talks about their secrets and fears well before the climatic scenes!

Outside of the romance, this book has a lot to offer fans. Readers learn more about the mafia-like group, Opus Nostrum, as well as the Breeds’ ancient enemy, the Atlanteans. While there isn’t a lot of progress on either front, I appreciate the strides made over the course of Bound to Darkness. I also felt that the story itself was more focused and complete than those of the past couple books (which served more as world-building books than achieving stellar plot development).

While I mostly enjoyed the book, I was a bit disappointed by the apparent relegation of Tavia to that more like a Breedmate when she’s a warrior Breed. And I question the minimized roll of Carys’ twin brother Aric, who was pretty much absent from the whole book. He always put up such opposition to Rune; he should have had a bigger roll.

Overall, I found Bound to Darkness highly enjoyable and my favorite of the newer titles. I love that the author didn’t go the usual direction most of the series titles take. The romance between Carys and Rune was well developed and more than “I love yous.” Additionally, the story outside the romance was exciting and well-balanced. Even after thirteen titles, the Midnight Breed series remains one of my auto-reads.

Carys Chase is accustomed to making her own rules and letting her heart lead the way–no matter what anyone else has to say about it. A rare Breed female and a daywalker as well, headstrong, beautiful Carys is one of the most powerful of her kind. She lives passionately and loves without limits, especially when it comes to the lethal cage-fighting Breed warrior called Rune.

Unbeatable in the ring, Rune exists in a brutal world of blood and bone and death. He’s made his share of enemies both in and out of the arena, and his secrets run as deep and turbulent as his past. A dangerous loner who has survived by his fists and fangs, Rune has never allowed anyone to get too close to him…until Carys. But when the bodies buried in his past rise up to threaten his present, Rune must choose between betraying Carys’s trust or putting her in the crosshairs of a battle neither of them can hope to win on their own.

13 responses to “Review: Bound to Darkness by Lara Adrian”