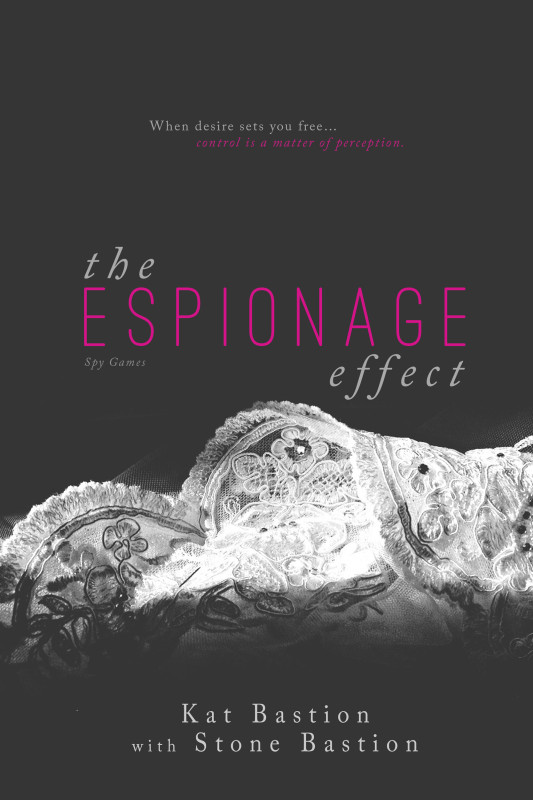 Shhh. Don’t judge me. If I ever have the privilege to meet Kat & Stone Bastion, I’ll totally fangirl all over them. That’s a warning, and everyone should save me from embarrassing myself.The Espionage Effect grabbed me by the neurons, tossed in some endorphins, a healthy dose of hormones, and let the adrenaline soar. In other words, it was one helluva ride.

I was completely intrigued when I learned about The Espionage Effect. It’s no secret I’ve been a Kat fan from the first page of Forged in Dreams and Magick (also, ITCHING for Born of Mist and Legend…), and my love of her writing extended—and possibly expanded—in the No Weddings series, co-authored by her awesome hubs, Stone. Naturally, I was entirely geeked to read The Espionage Effect. Gotta be honest. I’m picky about my romantic suspense titles/authors. I kind of have to know they’re solid in their craft before I’ll dive in and read. I know. Not fair. It’s the only way I can do RS, though.

Readers will find that while this title is sort of romantic suspense, it’s really more action-adventure—with the usual suspense tossed in for that genre. The romance IS there. And… It. Is. Sooooo. Hot!!! Tall, cool glass of somethin’-somethin’ needed, folks. And a fan. And maybe a fainting couch to catch you when you swoon.

If you’ve read my reviews before, you know I write a lot about how I connect with characters. The Espionage Effect review is no different. I feel like I *know* these characters. I *understand* their backstories. I *empathize* with them and their situations. Well, not the whole spy part. The closest I’ve come to being a spy is when I sit at Starbucks and people watch… and make up their ‘story’ as I observe.

This was an extremely fast-paced book. I don’t think there was really any down-time; nowhere obvious to take a break from reading (although I was forced to, grudgingly, put my Kindle down in favor of interacting with people, periodically). One event led logically and seamlessly to the next throughout the title.

The few minor characters in The Espionage Effect are necessary to round out the plot, are not extraneous, and are all planned and purposeful. No fluff or incidental characters to clog my brain. All the minor characters were likable (until they’re meant to NOT be likable), and meet their intent: to move the plot. Anna, Devin’s BFF, is the adventurous one of the duo. She’s lured Devin on this spur-of-the-moment vacation in a tropical paradise. Sun, fun, booze, and men are the order-of-business. Drop in a Baddie-in-Sheep’s-Clothing, and BOOM! Chaos ensues. In a good way.

Alec Marquez is definitely one sexy dude. I’m picturing young Antonio Banderas, here (no, that doesn’t date me at all…). With his own demons to battle, Alec makes a connection with Devin that can’t be denied. Cloaked in mystery, at least for a smidge… maybe longer… Alec intrigues me. He seemed to be wise and insightful. What got me the most about Alec was the way he innately *knew* things. I want to hint at the kinds of things he knew, but…spoilery! The best things about Alec reminded me of Mr. VampBard. Probably why I swooned several times.

Talking about Devin is easier for me. I connect with her on SO many levels it isn’t funny. I think the biggest message I took away from The Espionage Effect is to do what makes you happy and fulfilled. Not what everyone expects you to do. Or what you THINK they expect you to do. Devin is *much* stronger than she thinks, and seems to be sitting back and riding the ‘I’m supposed to’ train to ‘dull careersville’ when the story starts. She’s got all this inner turmoil going on, and it’s unsettling until she figures things out. I liked the way she didn’t hide her intelligence, too. The way she used logic to maintain a modicum of control over things she couldn’t control. Mostly, I loved the way Devin reasoned through her actions and reactions. It was sane, purposeful, and thorough. Like everything with her is premeditated via logic. I kinda wanna be Devin if I ever grow up.

I honestly loved every single minute of The Espionage Effect. It’s an intelligent, fast-paced read. I found it to be empowering in many ways, and it drove home something I’ve been striving for my entire life: doing what I’m meant to do versus what’s expected of me. And doing it MY way.

When desire sets you free…control is a matter of perception.

Tested as a genius at age seven, I hide my emotions, become what they expect…bury my secrets. At nineteen, I trudge toward a predestined path, blinders on, heart safeguarded.

Until I dare to be wild.

Until Alec Marquez crashes into my world.

Until all that follows redefines everything I’ve ever known.

What happens when you stumble into a world of spies…and discover you belong there?

2 responses to “Review: The Espionage Effect by Kat & Stone Bastion”