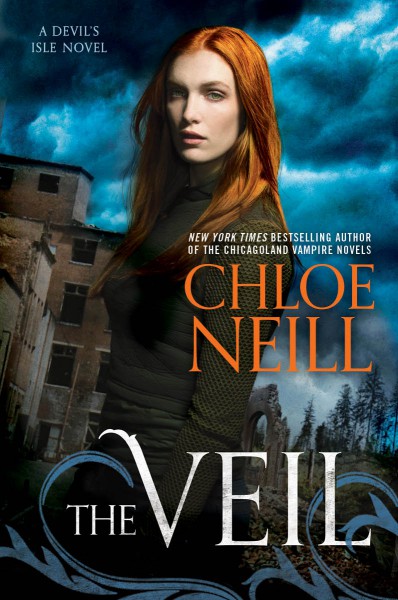 The Veil is the first book in the new Devil’s Isle urban fantasy series by Chloe Neill. The story, told from the first person point-of-view of heroine Claire Connolly, describes a post-war New Orleans (NOLA) that is recovering from a battle between humans and Paranormals (Paras). While the barrier between worlds has now been closed, several Paras remain on Earth. Additionally, it was discovered that some humans have a hidden aptitude for magic; however if they absorb too much, the magic will overwhelm their bodies, turning them into mindless wraiths. Clare is hiding the fact that she is a Sensitive, someone who can wield magic, fearful that if discovered, she’ll be sent to Devil’s Isle with the other Sensitives, wraiths, and Paras.

As the first book in a new series with a unique mythology, The Veil takes the time necessary for extensive world development. However, the book doesn’t drag and there are plenty action scenes and tense moments. While I wouldn’t label the future NOLA as dystopian because there is hope for recovery, they do live meagerly, and some like Claire live with the fear of being discovered as a Sensitive. Yet overall, the humans who remained in NOLA live simple and happy lives. I like that it’s not all doom and gloom in this alternative future.

Through a series of events, Claire learns that she’s not alone, and that not all Paras are the inhuman beasts mythology and the recent war would make them to be. As Claire uncovers more, her friends’ loyalties are tested. I throughly enjoyed the dynamics between Claire and her closest friends as they navigate what looks to be the beginning of new ways of thinking. Claire has to decide who to trust, and this includes newcomer hottie, Liam Quinn. He throws a bit of chaos and clarity into Claire’s world. Additionally, the pair has major chemistry, which poses an emotional conflict for Liam, a bounty hunter responsible for taking wraiths to Devil’s Isle for containment. I appreciate the juxtaposition of Claire’s desire and her need to what is best for her emotional well-being. These scenes provide the emotional backbone of the story.

Generally, I enjoyed Claire and her development over the course of the tale. Unfortunately, right from the beginning, Claire felt on the younger side to me – more like a teenager than her twenty-something self. I’m not certain if it is her naivety and innocence, or that she’s quick to trust, but once I got it in my head, it bugged me and she felt off – in my head she’s a teen, but her actions/romantic interests in the story are not. By the end of the book, I’d mostly gotten over it, and I hope when I start the next book, I’ll have shaken it off for good.

While steeped in world-building, The Veil also provides for some excitement and adventure. At the core is a mystery regarding the odd behavior of some wraiths. Watching the group as they uncover the pieces and put together the puzzle was engrossing. And while the book is a complete story, there are enough hints of what is to come to have me looking forward to the next book.

Overall, The Veil is a very interesting story with an engrossing and unique mythology. The book covers a lot, but never feels like an info dump or overwhelming. The hints of romance are intriguing, however I’m not completely connected to the pair yet. Part of the problem for me, was that Claire felt too young; I liked her, but she didn’t feel relatable. Regardless, I enjoyed her character development over the course of the book, and that, coupled with hints of what is to come, have me ready for another story sooner than later.

Seven years ago, the Veil that separates humanity from what lies beyond was torn apart, and New Orleans was engulfed in a supernatural war. Now, those with paranormal powers have been confined in a walled community that humans call the District. Those who live there call it Devil’s Isle.

Claire Connolly is a good girl with a dangerous secret: she’s a Sensitive, a human endowed with magic that seeped through the Veil. Claire knows that revealing her skills would mean being confined to Devil’s Isle. Unfortunately, hiding her power has left her untrained and unfocused.

Liam Quinn knows from experience that magic makes monsters of the weak, and he has no time for a Sensitive with no control of her own strength. But when he sees Claire using her powers to save a human under attack—in full view of the French Quarter—Liam decides to bring her to Devil’s Isle and the teacher she needs, even though getting her out of his way isn’t the same as keeping her out of his head.

But when the Veil threatens to shatter completely, Claire and Liam must work together to stop it, or else New Orleans will burn…

5 responses to “Review: The Veil by Chloe Neill”