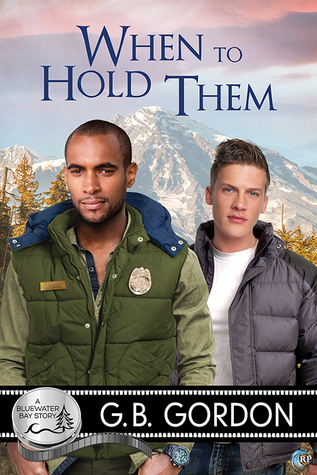 When to Hold Them
Author: G.B. Gordon
Reviewer: B.
Rating: B+

Some people are their own brand of trouble, regardless of whether they mean to be or not. Though he has a good heart and is trying hard to make amends after being put in jail because of his gambling addiction, Doran Callaghan easily falls into that category. Talented and artistic, yet often aimless, what he really needs is someone strong to look after him and help keep him on the right path. But, wishing they could fight your battles for you and having them beside you while you face your problems yourself aren’t the same thing, and learning to stand on his own might be the only way to hold on to the most perfect relationship he’s ever had.

Resilient, protective, and strong-willed, Xavier Wagner was always taught to stand his ground with a gentle hand. More comfortable in the forest where he works as a park ranger than among the residents of Bluewater Bay, he keeps to himself for the most part, content in his loyalty to the land and his parents. But, something about the young, secretive, hoodie-loving web designer with a serious crush calls to darker desires within Xavier, and redefining what it means to be a “good man” could very well give them both everything they desire.

While I enjoyed this aspect of the story a great deal, When to Hold Them is about far more than the awakening of Xavier and Doran’s desires. Other aspects of their relationship—trust, the more unpredictable manifestations that limits can take, responsibility, and so on—are given much more room to evolve, by comparison, which I was very pleased to see. Doran’s gambling addiction and how he’s coping is also a huge part of the narrative, and many valid points are raised about the need for more options when it comes to treatment and support. Neither Doran nor Xavier have had an easy time of things, for many different reasons, and the author skillfully allows their respective histories to shape them without irrevocably defining either man.

The importance of consequences also plays a significant role in When to Hold Them, and both men’s choices eventually lead to the most action-packed moments in the story. The man vs. man/man vs. nature/man vs. self climax wasn’t my favorite part, but it did bring the different threads of the narrative together with a real sense of understanding between Xavier and Doran. Even though I didn’t to stay as immersed in this particular scene, it still led to a sweet kind of resolution after all the misunderstandings and things unsaid between the two.

When to Hold Them is a well written, compelling addition to the Bluewater Bay universe. The series has been less about the Hollywood invasion of the town in recent stories, and I think the shift worked nicely here. G.B. Gordon has undertaken a lot in a fairly concise number of pages, but I never felt that any of the points made were condescending or “preachy.” In fact, I believe they were delivered remarkably well, wrapped as they were around two very likable characters. I’ve enjoyed quite a few in this series, to date, and When to Hold Them is definitely a keeper.

Doran Callaghan doesn’t know when to fold ’em. His gambling has landed him in debt and in jail, and now it’s got him stuck in the sticks in a reintegration program. He wants to turn his life around, but old habits come knocking, and some creditors are harder to shake than others.

Xavier Wagner cares more about the National Park he works in than the people around it, until a stranger awakens desires he didn’t know he had. Doran’s natural submissiveness turns Xavier’s ideas of how to treat a lover upside down. But Doran doesn’t seem to know about boundaries — or even to have any — and Xavier’s not sure that Doran will say no if he needs to. Which means someone’s going to get hurt.

While Xavier struggles with his principles, Doran’s past comes calling. Trusting each other is suddenly a matter of life or death, but Doran has to decide whether counting on Xavier — or himself — is a gamble he’s willing to take.

Purchase Info:
When to Hold Them: A Bluewater Bay Novel