Master of the Opera 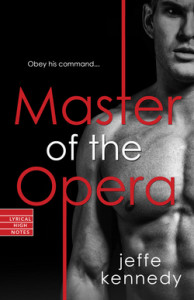 There it was again. A whisper of song. A honeyed tenor.

Curious, compelled, she followed it down the corridor, passing the various storage rooms, holding their eclectic treasures in darkness. The hallway ended abruptly in a dead end, a good thirty feet past the last lightbulb. Christy consulted her map in the dim light. If this was the right level, the hall should keep going to another set of storage rooms.

She retraced her steps, frowning at the map, then at the end of the hall again. The featureless wall hadn’t changed. Had the door been covered over or sealed? She set the map and inventory notebook down and walked back to the end of the hall, ran her hands over it.

Not drywall, but solid plaster, cool and damp to the touch. If it had been closed off, it didn’t seem to be recent.

Her fingertips caught on a small flaw in the smooth surface and she bent to see it better in the shadowy green light. A circle cut into the plaster, with what appeared to be a set of links dangling from it, like a collar and chain. It was crossed by a whip, the braided design painstakingly worked in.

She gasped, then swallowed it, glad no one had heard her.

She glanced around, uncannily convinced that someone watched, listened. Unable to help herself, she traced the emblem with her nail, wondering what it meant and why it was here.

And why something about it thrilled her, sent her blood percolating with intrigue and a desire to know more. Along with a strange familiarity.

A breath of cold air swept across the back of her neck again, and she stood abruptly, spinning on her heels and putting her back to the wall.

No one was there.

And yet … that tenor voice, golden and sweet, sang somewhere far in the distance, too distant for her to make out the melody, but the notes strummed across her stimulated nerves, soothing and arousing. She wanted to find it, to hear it better.

The song ended in a soft laugh. And then a whisper.

6 responses to “Sunday Snippet: Master of the Opera by Jeffe Kennedy”