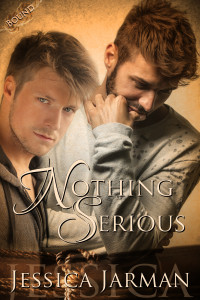 Heads up… today’s Snippet is extra hot and more NSFW than usual! Enjoy!

“What are you doing here, Aaron?” Jack sighed, shutting the door before crossing to the desk, with the intent to ring the front desk about a cab for the drunken idiot.

“I’m here for the sex, Jack. The ssssseeeeexx.” Aaron flopped back, arms spread, onto the mattress. “Though, I don’t know if it’s angry sex or make-up sex. Honestly, it’s hard to keep up with you and this…whatever it is between us.” He lifted his head slightly as his confused frown morphed into a cheeky grin. “F**k, I don’t care. Both are acceptable. Come on, then, time for the sex.”

“Drunk sex, it is!” He sat up quickly and yanked off his t-shirt, tossing it onto the floor. Then, rising to his feet, he fumbled with his belt as he toed off his trainers.

Jack stepped forward then stopped, because all he really wanted to do was dip his head and press his mouth to Aaron’s chest, map the ridges, slide his tongue along every tempting line of the man’s body. And that was not going to happen. Not until they talked s**t out. And clearly, that wasn’t going to be happening tonight, either.

“Aaron,” he snapped, hands fisted at his side as he fought the urge to touch. “Put your f**king clothes back on.”

Aaron lifted his head, having ducked down to look at the belt that was apparently giving him problems. His brow was furrowed as he ran his gaze over Jack from head to toes.

“You get your f**king clothes back off,” he retorted, returning his attention to the buckle.

Shaking his head, amusement bleeding through the annoyance, Jack closed the space between them and plucked the shirt off the floor. After quickly pulling it over Aaron’s head, he tried to take hold of the other man’s wrist, determined to get him dressed even if he had to resort to treating him like a child.

And child was the appropriate word, he thought as Aaron smacked Jack’s hand and angled his body away.

“Stop it,” he said petulantly. “We’re going to do the sex, Jack. We’re going to, because all the other stuff is too f**king— Yes! Finally!” he crowed as he got the belt undone and slid it from the loops. “Motherf**king belts.”

Jack reached around and grabbed Aaron’s hands as he was shoving down his pants, halting his movements.

“Just stop.” He cringed at the pleading tone, but damn it, he couldn’t deal with it if Aaron dropped trou. Well, he would, but fuck it all, he didn’t want to. Not tonight. “It’s not going to happen, you f**king wanker.”

He didn’t fight the firm hold, and for a brief moment, Jack thought he’d won. He really should have known better. Aaron suddenly shifted, pressing against Jack’s front, rolling his hips to grind against Jack’s cock.

“You could f**k me,” he murmured. “It’s been a while since we’ve done that. Such a good little cockslut so eager for me to be inside you, pounding into your ass and making you go crazy.” He pushed back and groaned. “But maybe you’d like a change? Maybe you’d like to hold me down and f**k me good and proper.”

“Hmmm, I suppose you holding me down isn’t what gets you going though, is it? Nah, maybe I’ll hold you down—because you love that, love my hands heavy and firm on you—and ride you, nice and slow, until you forget everything but the way I feel around you. And it would feel so good, pet. It hasn’t been so long that you don’t remember, has it?”

He closed his eyes and inhaled deeply, which was a huge mistake, because beneath the scent of beer clinging to the man, Jack could smell him. He couldn’t describe it exactly, but he’d know it anywhere, and longed to bury his face in Aaron’s neck and other warm, hidden places where the scent would be stronger, overwhelming, intoxicating.

Aaron pulled his hands free and reached back to grasp Jack’s ass, fingers flexing bruisingly. Jack had to bite back the whimper that rose in his throat but couldn’t stop the way his hips jerked forward.

“Oh, it’s hard enough.” Chuckling, Aaron dropped his head back onto Jack’s shoulder and pressed a wet, open-mouthed kiss on his jaw. “Want you to f**k me, make me feel you for days.”

Clenching his jaw, Jack held him by the waist and stepped back, only releasing him when Aaron was steady on his feet. “I already told you, it’s not happening. Even with a few drinks in you, you know the f**king meaning of ‘no’.”

He turned slowly, still a tad unsteady. “Seriously? You’re that pissed off?” He shook his head and moved to sit on the bed, shoving his hands through his hair. “Christ, Jack, what did you want me to do? This isn’t easy for me, you know? And, as awesome as my family is, this is going to hurt them. No matter how I do it—and I’m sure as hell not going to do it when my sister is getting married in a few days.”

Jack was almost disappointed to see and hear him sobering up. Almost. Maybe, now, it’d be easier to get him the hell out of here.

“We’re not talking about this. Not when you’re in this state.”

“You’re going to straighten your clothes while I ring the front desk to get you a cab home.” Jack walked to where the phone rested on the desk.

He almost didn’t hear the whispered word, but the quietness of the plea wasn’t any less painful for the lack of volume. Turning, he found Aaron hunched over, eyes closed, hand to his forehead.

“Don’t make me go back there. Not tonight. I don’t think I can stand facing an empty apartment, right now.”

Anger and sympathy warred within him. “It’s empty because that’s how you wanted it. You practically shoved me out the door when you heard your family was coming over.”

Instead of snapping back, turning the blame back on him, somehow, as Jack expected, Aaron tilted his head to look at him with glassy eyes. “I’m sorry.”

Jack went to him to him, sat on the bed and wrapped an arm around his shaking shoulders. “What happened? What made you go out and get s**t-faced?”

“Besides arguing with you and having you walk out?”

“I don’t think an argument or me being pissed at you is enough to make you give up the control you love so much.”

“You’d be wrong,” he murmured then straightened slightly. “But, yeah, it was…more.”

Jack ignored the twinge in his gut at his first statement and prompted, “Something to do with Emily?” It was a good bet, since she and her fiancé had been on their way when he’d left.

“I wasn’t expecting— I never thought she’d— Damn it.” He took a deep breath, blew it out slowly. “I had just assumed she’d asked Nathan to give her way at the wedding. She’s close to him—has been since before he married Mom. I didn’t really think about it beyond that, to be honest. Just focused on helping her when she asked, you know? Other than that, I just went about my life. But, tonight, she asked me to do it.”

Jack frowned, dragging his palm along Aaron’s warm back. “And you don’t want to?” Then, it hit him. Oh f**k.

“I didn’t think about it. Until she asked. That my dad wasn’t going to be there. Which is stupid. Obviously, he’s not going to be there—he’s been gone for fourteen years. I’ve mourned him, Jack. It shouldn’t be this upsetting.” He scrubbed a hand over his face.

“So, yeah,” Aaron said with short, forced laugh. “After fighting with you and getting surprised with that, I thought a few drinks were in order. And then, I didn’t want to be alone. I just wanted you.”

Jack bit his lip, wanting to argue that not wanting to be alone didn’t necessarily equate to wanting him. He didn’t want to think about just being a convenient body for Aaron to hold on to when things were rough. Then, again, he was stupid to think there was more to what they had than that. He just needed to decide, once and for all, if that was enough for him.

“Let me stay. Just to sleep. Fully clothed, even.” Aaron pulled away, making good on that statement by shoving his arms into the shirt that still dangled around his neck. Please, Jack.”

And there, that right there, was the problem. Refusing Aaron anything was something Jack had a hell of a time with. He knew he was in far deeper than Aaron was—the time he’d been here in the States was proving that again and again—and heartbreak was the only realistic end Jack could see.

But, he still found himself nodding. “Yeah, yeah, you can stay.”

Aaron smiled—trembling but wide—and wound his arms around Jack’s waist. As he buried his face in Jack’s neck, nuzzling, Jack called himself a million times the fool.

It would have just been easier to have f**ked him.