Hi, everyone! I’m so excited to be on the Base Instincts blog tour. Raze and Slake’s story was a labor of love for me, and while theirs isn’t the first m/m story I’ve written, it’s a first for the Demonica/Lords of Deliverance series. If you’re curious about how it all started, be sure to enter the giveaway for a chance to win the first two books set in the Demonica/LOD universe (details below), and for more information, head on over to www.LarissaIone.com!

That’s What I’m Taking About Review: 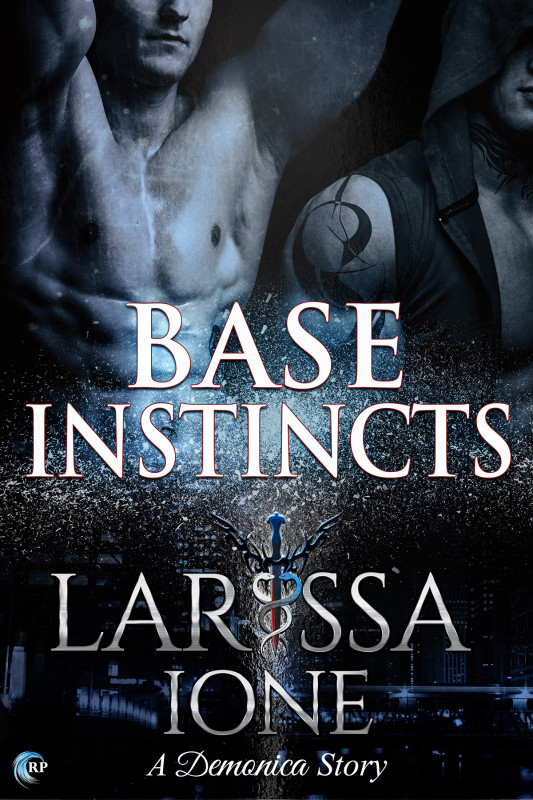 Damon Slake (aka Slake) never quite fit into his violent demon family, so he made a deal with a demonic law firm to escape his home. As a weapon specialist and bounty hunter, he successfully brings in any sort of prey his employer demands. His current assignment is to track down a demon named Fayle, and if he doesn’t bring her in ASAP, he’ll lose his soul to the law firm.

Raze works for Underworld General and at a high-end demon club as a paramedic. As a Seminus demon, he must have sex with a female every day or die a painful death; however, Raze is only attracted to males. Luckily, when he reached sexual maturation, his parents found Fayle, a succubus, to help ease his needs, and the pair has been together for 30 years. While the couple does what is needed for each to survive, it’s cold and impersonal. Raze is beginning to realize just how lonely his arrangement has made him when he meets the mysterious Slake.

Base Instincts is an exciting and entertaining novella set in Ms. Ione’s uber-sexy Demonica world. For those who know the series, you will delight in seeing several familiar characters who play relevant roles in Raze and Slake’s story. Although it is part of the Demonica series, the story is certainly standalone, although could be spoilerish if you aren’t up-to-date with the books.

Raze and Slake share an intense and immediate attraction. Unfamiliar with the biological requirements of Seminus demons, Slake pushes Raze’s buttons, demanding a sexual response. Once Raze gives in to his lust for Slake, he must explain the need for Fayle to be part of their passion. I loved that Slake didn’t let his feelings for Raze diminish because of his job and connection to Fayle. Both are two lost souls searching for that missing piece, and how they come together is both passionate and touching.

The only issue I had had more to do with the blurb describing Fayle as Raze’s best friend, rather than the story itself. While Raze views Fayle as a close buddy, it was evident right from the start of the book that there is little between the pair, and that Fayle is using Raze rather than being a friend. It’s not really much, but it made me scratch my head as to why the blurb called Fayle a “best friend.”

In the end, Base Instincts filled me with smiles and happy sighs; it truly was a wonderful read and well-put-together story. I admire how Ms. Ione doesn’t short-circuit her own mythology, but instead deepens it to make something special. She creates two unique characters that I grew to care about in a very short period. I loved reading about Raze and Slake working through the rough spots to ultimately find happiness.

As a Seminus demon, Raze’s life literally depends on having sex with females. The problem is that he doesn’t desire females, and it’s physically impossible for him to be with males. Thankfully, he and his best friend, Fayle, have an arrangement that keeps him alive . . . if lonely. He finds some solace in his work as a medic at Thirst, a vampire club known for its rough clientele. But his carefully structured world turns upside down when he meets a mysterious male who makes him want what he can never have.

Slake is an assassin used to getting what he wants, and what he wants is Raze. But he also wants to earn back the soul he sold when he was a much different demon. All he has to do is capture a runaway succubus named Fayle and hand her over to her family. What he doesn’t count on is being caught himself by a web of lies—and his attraction to Raze.

Raze and Slake must navigate a dangerous world to be together. But as Fayle’s jealousy of their relationship turns deadly, they find themselves embroiled in a battle not only for their love, but their lives and souls.

Larissa Ione is an award-winning New York Times and USA Today bestselling author. An Air Force veteran and former EMT, she traded in a career as a meteorologist to pursue her passion for writing. She now spends her days in pajamas with her computer, strong coffee, and supernatural worlds. She believes in celebrating everything, and would never be caught without a bottle of champagne chilling in the fridge . . . just in case. She currently lives in Wisconsin with her U.S. Coast Guard husband, her teenage son, a rescue cat named Vegas, and her very own hellhound, a King Shepherd named Hexe.

Every comment on this blog tour enters you in a drawing for a tote bag with swag and signed copies of Pleasure Unbound and Desire Unchained, the first two books in the Demonica/Lords of Deliverance series! Entries close at midnight, Eastern time, on September 19. Contest is NOT restricted to U.S. entries. Don’t forget your email so we can contact you if you win! This blog, its reviews, and its owner are not responsible for the prizes nor distribution.

57 responses to “Blog Tour + Review: Base Instincts by Larissa Ione”