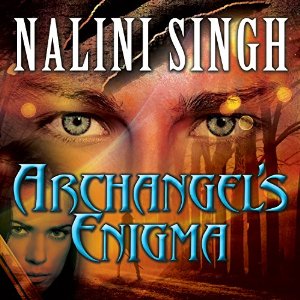 This was my first time listening to a Guild Hunter series book rather than reading it.  I truly enjoyed the experience and may do it again.  This series continues to be one of my absolute top series to follow.

I loved Naasir and Andi’s story in Archangel’s Enigma.  At first I was apprehensive about Naasir, the glimpses we got from other characters’ perspectives made him seem far more juvenile than he is.  I wasn’t sure I wanted such a youthful story of love.  However, I need to have more faith in Ms. Singh and her ability to craft a story.  Through this novel, we truly see him as he is – all of his uniqueness, intelligence and mirth.  Nassir possesses a childlike core of truth and honesty, even with his mischievousness.  I now truly understand why he is a part of the Seven and he certainly belongs there.

Andi was the right mate for him and I absolutely loved the honesty between them, their communication, their playfulness and the honor that they both hold so dear.  They truly are a wonderful couple.  Andi was far braver and stronger than I gave her credit for in the beginning.  Her will is of iron and her loyalty absolute.  I loved her strength of character, and her ability to abide by what she knows is right.  The contrast between her and her family is staggering, but the glimpse of the true character of her mother at the end was bittersweet.  I really loved the journey Andi takes.

So much happens in this installment of the Guild Hunters series:  the awakening of another ancient, the thickening of Lijuan’s plot to rule the world, and the evolution taking place due to the Cascade (and the continuing effects it is causing).  It was completely gripping.  Though we are given no clues to who will be the focus of the next book, I look to the complexity of Illium and the effects of the Cascade on him, the continued healing of Aodhan and the possibility of Venom, or perhaps a book that focuses back on Raphael and Elena.  No matter what I eagerly look forward to more in the series, it is truly one of my favorites.

It would be remiss of me to not convey how much Justine Eyre’s performance truly enhanced this novel.  Her skill with accents absolutely added to the richness of Ms. Singh’s world and the characters.  I loved how she utilized a narrator’s voice, making the dialogue stand out with the accents.  Her ability with voices was stellar and I hope to listen to more of her work in future.  I easily fell into the world listening to her voice brought the world to life.  If you haven’t listened to her before, I seriously recommend this series and her narration.

Naasir is the most feral of the powerful group of vampires and angels known as the Seven, his loyalty pledged to the Archangel Raphael. When rumors surface of a plot to murder the former Archangel of Persia, now lost in the Sleep of the Ancients, Naasir is dispatched to find him. For only he possesses the tracking skills required-those more common to predatory animals than to man.

Enlisted to accompany Naasir, Andromeda, a young angelic scholar with dangerous secrets, is fascinated by his nature-at once playful and brilliant, sensual and brutal. As they race to find the Sleeping archangel before it’s too late, Naasir will force her to question all she knows…and tempt her to walk into the magnificent, feral darkness of his world. But first they must survive an enemy vicious enough to shatter the greatest taboo of the angelic race and plunge the world into a screaming nightmare…