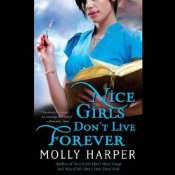 After suffering much of the downside of being turned into a vampire in the previous two books, I feared that Jane Jameson was going to be one of those characters who never learns, doesn’t really change, and is the unfortunate recipient of lots of bad luck. So, I’m happy to report that things turn around for Jane in her third adventure, Nice Girls Don’t Live Forever. While there are still several less desirable things that happen in Jane’s life, overall, this book marked a significant turning point for Jane.

The book begins with Jane determined to make the most of her relationship with Gabriel as they tour Europe; however, Gabriel has grown distant, while acting extremely suspicious. I frankly did not like the man he’d become and cheered Jane on as she walked out on him, although my heart also broke for her. Moving on without Gabriel, Jane successfully opens her bookshop, but her life takes several bumps along the way, and now Jane doesn’t have Gabriel to help her through. Nice Girls Don’t Live Forever follows Jane as she navigates her romantic relationship, meddling family, friendships, running her own business, and protecting herself from a stalker.

Like the previous two titles, the story bounces all over the place, reflecting Jane’s own thoughts and actions. She’s a bit spastic and neurotic, making her enduring, but a bit hard to follow at times. There are scenes, which initially felt a bit random, only to have Jane come back around to that issue/topic down the road. Sometimes it felt a little overwhelming, but overall the story flowed well, especially with Amanda Ronconi narrating the tale. And Jane’s sarcastic wit stoled the show, allowing me to laugh away any little irritations.

I will admit, I was initially a bit frustrated with Jane and all the crap tossed her way. But then Jane started standing up for herself and making better decisions. I cheered as she was able to find herself, while continuing to stick her foot in her mouth from time-to-time. I especially enjoyed watching as Jane grew closer to her own family, despite the obstacles that were in the way. By the end of the book, I felt that Jane reached a new level, completing her transformation into a self-confident vampire.

Another wonderful aspect of Nice Girls Don’t Live Forever was the stalking storyline. What could have been a straight-forward plot ended up being deliciously twisted, surprising even me. And although a majority of the climatic scene was off-page and a tad bit simplistic, the overall plotline was exciting and entertaining.

Once again I will state that Amanda Ronconi is the ideal narrator for this series. I enjoy her southern charm, which she dishes out in varying degrees based on each character. My favorite voice is that of side character, Dick Cheney, whose charm and humor oozes right out of my earbuds. My only complaint, which I’ve mentioned before, is the lengthened pauses between the dialogue and the “she asked,” or “he said,” phrases. It can be a little disruptive to the flow.

Overall, Nice Girls Don’t Live Forever is an fun, entertaining story, and probably my favorite thus far in the series. With only one title left in the Jane Jameson titles, I wonder where the author will take our lovable heroine.