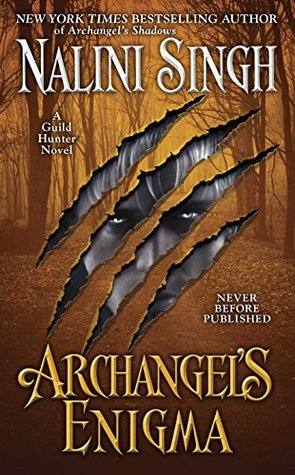 Archangel’s Enigma picks up the story of angels, vampires, and Hunters roughly seven months after the conclusion of the previous book. Readers learn that Archangel Lijuan is, in fact, alive, yet not whole. Still viewing herself as a goddess, she seeks to act on a prophecy by killing one of the Ancients while he Sleeps. It is up to Raphael, with the help of Elena and his Seven, to prevent Lijuan from finding and harming Alexander.

As a scholar and an expert in Sleeping Ancients, Andromeda is Raphael’s best bet to stop Lijuan. However, she is also Charisemnon’s granddaughter. (Charisemnon is the one who caused the Falling and a deadly vampire disease, and was aligned with Lijuan in the past). Since Andromeda has cut all family ties, Raphael trusts her and sends one of his Seven, Naasir, to protect her from Lijuan and assist her in her endeavors. When he meets Andromeda, Naasir, who has been on the hunt for his mate since the conclusion of the previous book, decides she may very well be his hidden mate.

There are so many wonderful things about Archangel’s Enigma. Both the romantic storyline and over-arching plot of the brewing war between the Archangels, are entertaining and completely engrossing aspects of this tightly woven story. The two parts are well balanced, creating an almost perfect reading experience: urban fantasy action and intrigue together with a sensual paranormal love story.

And once again, Ms. Singh proves how she is the master of character development. I’ll admit that I didn’t know how she’d be able to pull of a romance for Naasir. A little known and rarely seen member of the Seven, Naasir came across child-like, innocent, and almost feeble-minded in his actions and dialogue during the previous book. Yet at only the 12% mark of Archangel’s Enigma, I saw Naasir as a viable sexual being while maintaining his curious and innocent persona that made him feel childlike. Reading how his mind works and how he sees the world on a large scale and in ranging situations from lust to vengeance, sincerity to hurt, created a genuinely lovable character.

Similarly, Ms. Singh creates the perfect match for Naasir in Andromeda. Both a scholar and a warrior, she understands and sees more than most others, and values Naasir for the person he is under the enigma of his species. She’s patient and kind, despite her upbringing. The fact that she has required so much discipline from herself to set herself apart from the actions of her family, gives her honor, fierceness, and sincerity that few seem to possess.

Additionally, the author does much to move forward the overall plot revolving around the oncoming Cascade, Ancients, and feuding Archangels. Rather than continuing to spread out the story, Ms. Singh seems to twist and evolve the entire plot, keeping it moving forward rather than allowing it to grow too large and unruly. Although there is a lot of complexities tossed our way, it all flows seamlessly and logically. By the end of the book, I was already jonesing for the follow-up story!

Overall, I really enjoyed Archangel’s Enigma. The character development, world-building, and storytelling are, once again, amazing, and the plot has few negatives. The romance between Naasir and Andromeda, while slow-burning, is everything I could have wanted. I found the overall politics of the Cadre utterly compelling. The Guild Hunter series continues to be one of my Top 5 must read series.

Naasir is the most feral of the powerful group of vampires and angels known as the Seven, his loyalty pledged to the Archangel Raphael. When rumors surface of a plot to murder the former Archangel of Persia, now lost in the Sleep of the Ancients, Naasir is dispatched to find him. For only he possesses the tracking skills required—those more common to predatory animals than to man.

Enlisted to accompany Naasir, Andromeda, a young angelic scholar with dangerous secrets, is fascinated by his nature—at once playful and brilliant, sensual and brutal. As they race to find the Sleeping archangel before it’s too late, Naasir will force her to question all she knows…and tempt her to walk into the magnificent, feral darkness of his world. But first they must survive an enemy vicious enough to shatter the greatest taboo of the angelic race and plunge the world into a screaming nightmare…