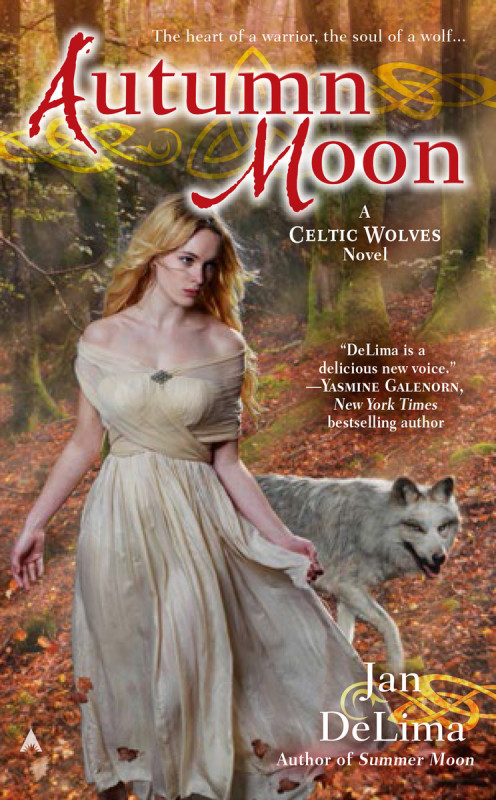 Autumn Moon is another exciting tale in the Celtic Wolves series. Ms. DeLima has found a way to make shifters and paranormal romance exciting and engrossing again. I love her mix of mythology, even if I get confused by the terms from time to time. What I’ve learned is that I don’t have to remember every single detail to enjoy the story.

Cormack and Elen have a romance that is a few hundred years in the making. Long-time friends, hampered by the fact that he was born in his wolf form and unable to shift, the pair spent countless hours together. The fact that he was wolf wasn’t weird because it never was sexual; however a deep bond did form. Once Cormack became human, each realized that bond equated to love and desire. I admire how Cormack wanted to learn to be a human – a man – without Elen’s assistance, and I like that Elen, while frustrated by his distance, understands his logic.

While the story could have been bogged down by misunderstandings, keeping the pair apart, the author did a good job minimizing the impacts of communication breakdowns. And while the couple didn’t come to terms with their true feelings after the midpoint of the book, the coupling didn’t feel prolonged because of silly issues between the pair. Both sweet and innocent, yet passion and flames, the pair’s chemistry was perfect, and they made up for any inexperiences with enthusiasm.

The overall story involving the Guardians and a pending war moved forward over the course of Autumn Moon. There were some great twists within the book, especially one that I didn’t piece together until it was “too late.” It was evident by the conclusion of the book that all the pieces are falling into place to create a maelstrom of violence against the “lesser” wolf packs. I worry that things are going to get worse before it gets better, but I look forward to the journey. What I love about the Celtic Wolves series is that the overall plot has an urban fantasy vibe to it, yet every book has a stand alone romance, therefore, the reader gets a happy ending with each title.

Overall, I enjoyed Autumn Moon and look forward to finding out what’s going to happen next for Dylan, his family and friends, and his pack.

The heart of a warrior, the soul of a wolf, and the desires of a man…

For centuries, Cormack has lived between worlds—a man trapped in the body of a wolf, shunned by humans and shifters alike. Only one person has ever welcomed his company: Elen, a kindred outcast who is feared by others of her ancient Celtic race for her strange healing abilities.

Cormack has always valued Elen’s kindness and understanding, but after a desperate act of friendship causes Elen to free him from his curse, he realizes he wants more. He wants all of her—completely and forever.Except before Cormack can win Elen’s heart, Pendaran, the evil leader of the Guardians, captures her, determined to manipulate her incredible power to aid him in his twisted war against the shapeshifting tribes.