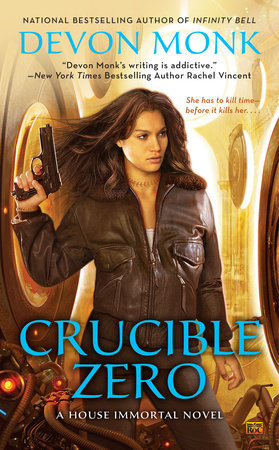 Gikany and Una are a little sad that the House Immortal trilogy has come to an end.  We really loved the world and characters and although this novel wrapped up a little too quickly for our tastes, we still liked it.

We have to say that Ms. Monk really took us for a ride in this world.  The story never went where we expected it to and we really liked how the story unfolded and the directions it went.  The characters were endearing and the world was fascinating.  We are sad that what we thought was a series in this engaging world turned out to be only a trilogy.  The slowly burning romance between Matilda and Abraham was as gripping as their fight to mend time and thwart the antagonist.

Una found herself much more easily immersed in the mythology than Gikany, who reads much more science fiction.  Gikany found herself sidetracked by the details: why are the alternate worlds so similar, and why are the characters in the alternate worlds so similar to each other (have the same names, similar backstories, etc)?  Wouldn’t they be different due to the different timelines?  Would all of them still exist?  Shouldn’t the political structures be more different?  It was fascinating to Una, who was able to understand Gikany’s point of view, but accepted that the author’s purpose was to only show the timelines that were the most closely linked.  Maybe there were other timelines that were completely different, but we don’t know about them since we were only exposed to two timelines.

However, Gikany and Una both agree that Crucible Zero would have benefited from having several more chapters.  The ending was abrupt.  The final confrontation with the antagonist seemed to be over in the blink of an eye, especially considering the immense build up to it.  In addition, since this was the last novel, we would have liked to have experienced more of the aftermath.  It wasn’t until the end of the novel that we realized that this was the completion of the over-arching plot arc.  Although it does resolve the series, we still hoped and wished for more.  The world was fascinating and we wonder what will happen in the future for Matilda and the rest of the galvanized.  We’d love to see a novella that shows Welton and Foster, or a follow-up of all of them.  Ms. Monk’s ability to create characters that are so real makes it very difficult for us to say goodbye.

Again, although we were a tad disappointed in how quickly the final confrontation ended, we really liked Crucible Zero and thought that it resolved the trilogy well.  Overall we enjoyed the House Immortal series and would recommend it to any science fiction fans.  We eagerly await whatever Ms. Monk has planned next even as we will keep our fingers crossed that she decides to revisit this world.

Our Rating (Novel):  B+ Liked It A Lot
Our Rating (Trilogy): A- Enjoyed A Lot

Matilda Case never thought of herself as a hero. But because she is galvanized–and nearly immortal in her stitched, endlessly healing body–she doesn’t have much of a choice. Even if she doesn’t want to save the world, she’s the only one capable of traveling in time to do so.

But her rescue attempt hasn’t gone as planned. She’s stuck in an alternate universe, and her world is in danger of disappearing. Worst of all, an unfathomably powerful man who can also travel through history doesn’t want her to put things to rights. He’s willing to wage bloody war to stop Matilda, unless she surrenders control of time to him.

Now, with the minutes ticking, Matilda must make impossible decisions, knowing that one wrong choice will destroy her–and any chance of saving everything she loves…