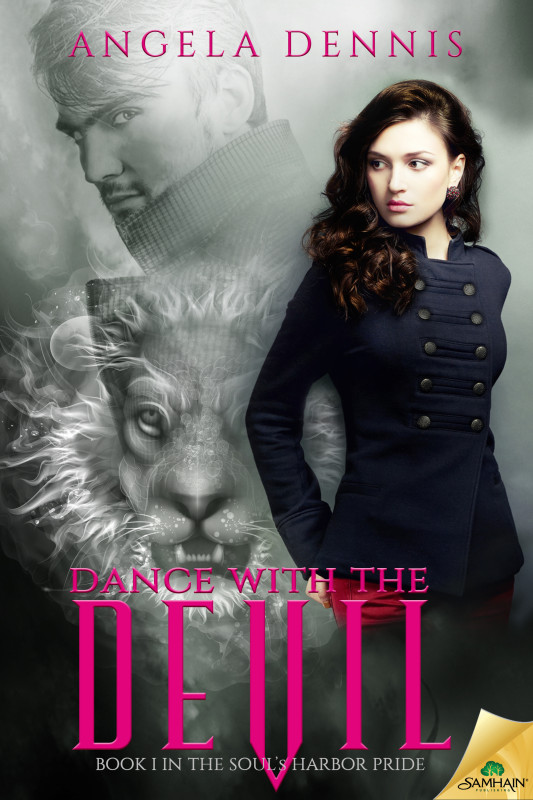 Dance with the Devil
Author: Angela Dennis
Reviewers: Gikany and Una
Rating: B

Dance with the Devil is the first book in the Soul’s Harbor Pride series.  We had not previously read any books by Angela Dennis, but her new paranormal series sounded interesting.  Overall, we are glad we picked it up. This lion shifter series shows promise, and we look forward to more.

The beginning of Dance with the Devil is heavy on the sex, but the novel ends up being pretty well balanced between the romance and the mystery plot lines.  We liked the political suspense provided by the issues of the Council and their prejudice against half-breeds. We also enjoyed the suspense of whom Jillian would choose to mate with – would she take Lucas and follow the dictates of the Council or would she choose her heart and pick Carrick.

The mythology was interesting, and we look forward to learning more in the upcoming novels in the Soul’s Harbor Pride series.  We have read a lot of paranormal novels that focus on shifters, and we found this one to be fascinating.  We liked how the half-breeds are actually stronger than the pure-breed shifters.  The prejudices and politics that come from that were an interesting quirk.

Although we were concerned with how Carrick and Jillian’s story started, we were pleased with how they ended up.  They do share a history, and with the mythology of mating, their desire makes sense.  But to have them mate at the very beginning of the book was a bit much.  The novel shows the points-of-view of both Carrick and Jillian, which helped to give weight to their connection and feelings.  Their journey was compelling and we liked how they finally came together.

We do wish that the antagonist’s backstory and character had been fleshed out better.  His identity was supposed to be shocking, but with so little information given about him and with us having no contact with him, it isn’t all that surprising.  Although the manipulations and assassination attempts were not particularly surprising (nor was the identity of who was behind them), the story was still compelling and engaging.  We liked how it progressed and resolved as we watched Jillian, Carrick, Lucas, and the Council appointed Regulator, Quinn, work to find out who perpetrators were and who was pulling their strings.  We especially loved Jillian’s two best friends, Garth and Abbey.  We were a bit disappointed that we were not able to see the aftermath of the mating ceremony or of the joining of the packs, but hopefully that is because it will be at the start of the next novel.

Despite it’s shocking start, we liked Dance with the Devil and look forward to the next novel in the Soul’s Harbor Pride series.  We hope to see more of Garth, Abbey, Lucas and Quinn as well as checking up on the happily-ever-after of Jillian and Carrick.  If you enjoy shifter novels with other paranormal creatures, you might want to give this new series a try.

Born to be enemies. Destined to be lovers.

After killing one of her father’s enforcers, half-blood lion shifter Jillian Winters ran for her life, landing in an upscale bar halfway across the country. Her boss, Carrick—a pure-blood shifter—has no idea his barmaid is a fugitive.

When her father’s recklessness puts the Pride at risk, Jillian must return home and assume his place as Alpha. But not before she indulges in a taste of the attraction that’s been building for years between her and Carrick.

Carrick Granger has had a soft spot for Jillian from the moment she stepped into his bar, soaking wet and afraid of her own shadow. He knows she has secrets. So does he. He’s also the outcast son of an Alpha—and now that his father is dead, he, too, has been summoned home.

Thinking they’ll never see each other again, the simmering heat between them ignites like a match to gunpowder. But then the bullets start flying, forcing them to choose—duty to their Prides, or the one person they can’t live without.

2 responses to “Review: Dance with the Devil by Angela Dennis”