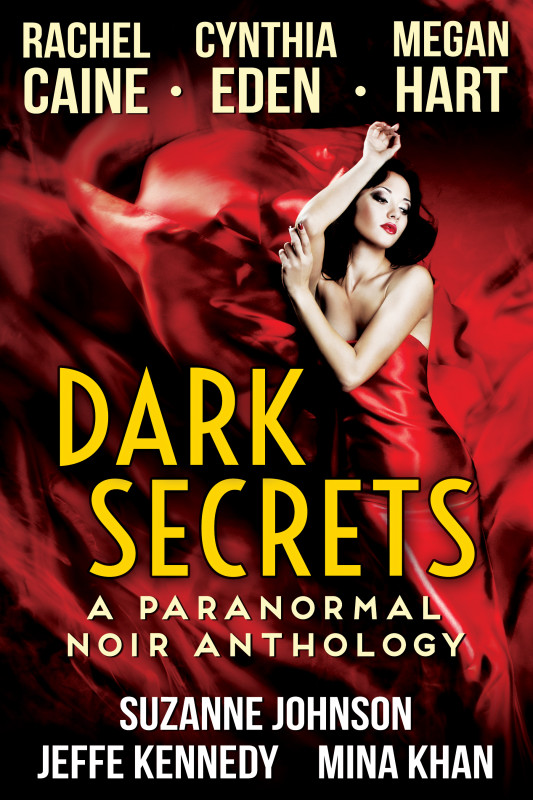 The Dark Secrets anthology gives readers a look at six very different paranormal-themed novellas, each with varying degrees of darkness and all with a touch of romance.

Set in post-WWII Texas, Warren Valentine (Val) is mourning the death of his PI partner, Tilde Sands, a negro female. However he’s having trouble since she’s manifested as a ghost that won’t leave him alone until he stops the man who killed her. Marion, Missing? is a decent noir detective story with a twist on paranormal romance. The mystery and crime-solving went a little slowly and felt abstract because Tilde couldn’t tell Val directly what she knew. The story was okay, but not really my thing.

The second story in the anthology is another PI mystery. Mick Swayne lives in a world where humans are unaware that the monsters of myth and movies are real. When two young men are found dead, and their bodies drained of blood, vampire Savannah Moreau hires Mick to help her stop the vampire killer and protect her from being the next victim. Femme Fatale reads like a more typical paranormal romance, albeit shorten. I liked the twists the author tossed in; however, sometimes the dialogue felt cliche and corny. And some of the plot points were equally as cheesy, but it mostly works for the story.

Dance with the Devil by Megan Hart

Kathleen Murphy sold herself to the Devil long ago, and now she must do his bidding or give up her soul. She remains lonely and isolated, even from her beloved daughter, in an effort to protect those she cared about. Yet somehow Jake cuts past the walls Kathleen has erected and steals her heart. Dance with the Devil absolutely blew me away! It was an intense and emotionally powerful tale of the lengths one will go to for those she loves. I love how we didn’t typically know what the Devil asks of Kathleen, yet we saw the emotional upheaval and physical results of the manifestations of her guilt. It’s very powerful: horrific without being gruesome. The story is utterly engrossing and compelling, really making me think after I finished reading it. The tale is heartbreaking, yet beautiful in so many ways.

Faulkner Hearne is the captain of the Fae Hunters, a group who lives in the human realm, tracking down the Fae who cross over without permission. When he is commanded by the Prince of the Summer Court to locate his newest consort, Liandra, Faulkner isn’t certain he’ll be able to turn her over to face the horrors that await her. As a huge fan of Ms. Johnson’s Sentinels of New Orleans series, I completely enjoyed seeing the Winter and Summer Fae Princes again. I enjoyed that the pair knew each other from youth; how he remembered her. Since I love the world and series, this was an enjoyable, quick read; however I’m not sure how it would play out if I hadn’t read the series. Overall, an entertaining paranormal romance.

Cavan, prince and heir to the throne of Erie, was wed via long-distance to Princess Natilde, who has just recently arrived at his castle. He had hoped for a connection, but when he saw her there was none. He feels down and bleak, except when he’s with the servant girl, Nix. The woman formally known as Natilde, now called Nix, is posing as a servant girl in the keep of Princess Natilde. Heart’s Blood shares the sweet romance between two souls. I enjoyed discovering what put Nix in her predicament and watching Cavan piece together the truth. The two make the perfect pair. Both fair, honest, and just, putting the best interests of others before themselves. Their love filled me with optimism and happiness.

This paranormal romance is loosely based on the Cinderella fairytale, with Dahlia playing the part of the abused stepdaughter and Edgar, the evil stepfather. Edgar is a dark witch and sadistic cult leader who wants Dahlia for himself and to use the powerful heritage blood within her for his own power. But when Dahlia discovers a djinn, Ashmael, trapped in a mirror, she frees him and barters for her protection. The Djinn in the Mirror was my least favorite title in the anthology. I didn’t care for the continuity of the story. It started with saving Dahlia, then once Ashmael was freed, an entire second story began, with Ashmael traveling home and discovering his family was betrayed and killed. While there were some good parts to that piece of the story, I think the tale would have been much better if it stayed focused on one aspect or the other. Even then, I felt the story dragged. It was a bit cheesy, and I just couldn’t get into it. Dahlia was too wide-eyed and idealistic.

So in the end, Dark Secrets has three great stories and three not-as-great stories. None were bad, and the three that I enjoyed are certainly worth purchasing the book. It’s tough to give the entire book an overall rating because of the spectrum of individual ratings for the parts.

My Rating (for the entire book):  B, Liked It

Six award-winning authors bring you this spellbinding collection of stories about dark desires, mysterious worlds, and danger that lurks in the shadows of the night. Where nothing is black and white; where things might not be as they seem; where magic and mayhem rule.