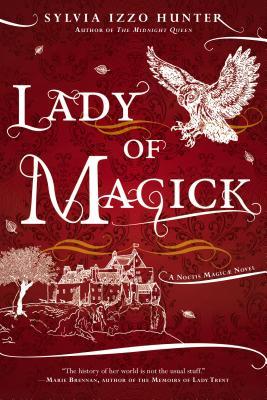 Ms. Hunter has done it again!  I enjoyed this second installment in the hauntingly beautiful and mysterious Noctis Magicae series.

Though Lady of Magick moves slowly, it is only because it is like a chess match; pieces slowly moved into position until you realize too late the trap you are in. As in the previous novel, Sophie and Grey move about in their latest adventure, while slowly the mystery and clues are building up around them. I love the slow burn mystery set within scenery and a world that is breathtakingly and hauntingly beautiful and rich.  The historic setting, mixed with the magic and history of the world, weave together such a rich background, it is mesmerizing.  However, for me, the language slowed down my reading speed, as it has the cadence and pace of a historic novel.  But in that, I enjoyed that my vocabulary has expanded in the exercise. The way the author can weave together the fantastic elements with the political intrigues, the mystery and the love/life affairs of the characters, is spellbinding.  There just so much to enjoy and appreciate in this series.

Without giving anything away, I loved how the mystery meandered; the clues plainly visible, but due to the timing, easily overlooked.  The race to save Grey was gripping and nerve-wracking.  I also enjoyed the on-going political/romantic intrigue of Roland and Joanna.  There are some interesting cliffhangers in that realm, and I eagerly look forward to seeing how it eventually plays out.  I also hope we will see how Sophia’s other sister is faring.  Not to mention, what will Sophia and Grey stumble into next.

It is difficult to discuss this novel without giving anything away.  But suffice to say; once I was able to slip back into the comfort of the language and the land, I was lost in the world.  I found it difficult to put down, as I eagerly wanted to know what was in store for Sophia and Grey.  I feel as if there is still so much left for them as they continue on striving for a happily-ever-after.

Though I hope it is not the end, but just another milestone in this fascinating and gripping series, I enjoyed Lady of Magick.  If you enjoy historical mysteries within fantasy world, look no further and give the Noctis Magicae a try.

In her second year of studies at Merlin College, Oxford, Sophie Marshall is feeling alienated among fellow students who fail to welcome a woman to their ranks. So when her husband, Gray, is invited north as a visiting lecturer at the University in Din Edin, they leap at the chance. There, Sophie’s hunger for magical knowledge can finally be nourished. But soon, Sophie must put her newly learned skills to the test.

Sophie returns home one day to find a note from Gray—he’s been summoned urgently to London. But when he doesn’t return, and none of her spells can find a trace of him, she realizes something sinister has befallen him. With the help of her sister, Joanna, she delves into Gray’s disappearance, and soon finds herself in a web of magick and intrigue that threatens not just Gray, but the entire kingdom.

Reviews in the Series:
The Midnight Queen by Sylvia Izzo Hunter (Noctis Magicae #1)

6 responses to “Review: Lady of Magick by Sylvia Izzo Hunter”