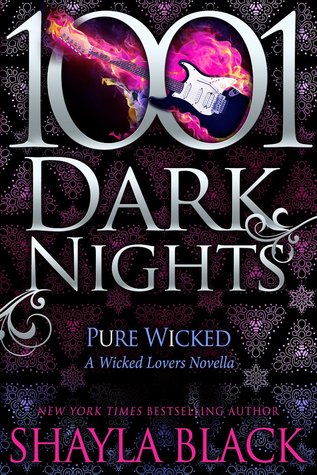 I’ve read a handful of the 1,001 Dark Nights books, to include Forever Wicked by Shayla Black (Goodreads Review), and I have honestly enjoyed the stories, regardless if I’ve read the original series. Such is the case with Ms. Black’s offerings. Written to be completely stand alone, I had no troubles jumping into Ms. Black’s Wicked Lovers world and the Pure Wicked novella.

Jesse McCall is a world-famous pop star who has been selling out shows since at the age of sixteen. Twelve years later, he’s still doing the same; however, a year ago the party life almost ruined him, so he’s been sober since. Unfortunately, his bandmate Ryan didn’t clean up his act, leading to a horrible tragedy, which is used as the opening scene for the book. Now Jesse must lay low until the media circus quiets down.

Bristol Reese isn’t having the best day. Forced, due to southern society’s rules of hospitality, to attend the engagement party of her ex-boyfriend and her own sister, she’d rather be anywhere. So when a handsome stranger offers to be her new pretend beau to get her mom off her back, Bristol decides to play along. Yet once the pair spends a few hours together, they realize their attraction is something worth exploring.

Pure Wicked is wonderful romance and absolute joy to read. While limited by a shortened length, the story is fulfilling and emotionally rewarding. Ms. Black is able to condense a whirlwind romance effectively, leaving me content and happy at the end, which is not always an easy thing to do in a novella-length story. There is just enough conflict and satisfying character development to create a complete romance.

Jesse and Bristol work well together. The author does a great job setting up Jesse’s character as one who is clearly ready for a change. He’s already 90% through the metamorphosis, and it just takes a tragedy, followed by meeting Bristol, to bring him all the way around. Meanwhile his sheer enthusiasm for life and Bristol left me satisfied that they will make it past the paparazzi and demanding lifestyle of a rock-and-roll star.

Pure Wicked is the perfect afternoon read. It is simple enough to blaze through, yet filled with enough complexity to leave me satisfied. And the pair has off-the-charts chemistry, which is important in a novella-length romance. I highly recommend this little gem of a story for a quick, yet fabulous read.

During his decade as an international pop star, Jesse McCall has lived every day in the fast lane. A committed hedonist reveling in amazing highs, globetrotting, and nameless encounters, he refuses to think about his loneliness or empty future. Then tragedy strikes.

Shocked and grieving, he sheds his identity and walks away, searching for peace. Instead, he finds Bristol Reese, a no-nonsense beauty scraping to keep her family’s business afloat while struggling with her own demons. He’s intent on seducing her, but other than a pleasure-filled night, she’s not interested in a player, especially after her boyfriend recently proposed to her sister. In order to claim Bristol, Jesse has to prove he’s not the kind of man he’s always been. But when she learns his identity and his past comes back to haunt him, how will he convince her that he’s a changed man who wants nothing more than to make her his forever?