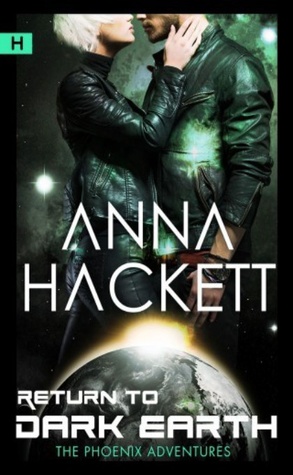 Niklas Phoenix left the Galactic Institute of Historic Preservation after his dreams were crushed upon realizing that his mentor and others were selling the artifacts for a profit. That was the day he left to become a treasure hunter with his brothers. Now the Institute wants him back for a never attempted before expedition of ancient Earth.

Nera Darc is a deadly treasure hunter who has long been the bane of the Phoenix Brother’s collection efforts. Loaner. Killer. Sneak. But Niklas believes there is more to Nera, and with each encounter, he wants her more and more. When he finds out she’s on the expedition to Earth, he decides it is time to make his move.

Nera and Nik’s connection, which began back with the start of the series, was thrust into overdrive when Nik decided it was finally time to make his move. I love how aggressive he became towards Nera once Nik finally decided it was time. He used to be broody, but now he’s optimistic and happy. I love the new Nick. Putting the pair into danger – it’s the pair against the world, literally – helped bring them together in a way only imminent death can. I think my favorite aspect of their dynamic is that Nik truly sees Nera as his equal. He treats her as he would any other; even better because he respects her, listening to her and not trying to protect her unnecessarily, trusting her to take care of herself. Their romance is full of excitement, both in the bedroom and out. They are silly and tender, rough and passionate.

“As Niklas walked alongside Nera the next morning, he felt sated and relaxed… but he had more than a few aches. The scratches on his back stung, he had a handful of bite marks, and his muscles were aching. None of it had anything to do with escaping from rampaging zombies. He smiled. He’d never felt better.”

While I enjoyed watching Nik and Nera circle their feelings and finally connect, I had a few issues with the overall plot of the story. I understand that it’s science fiction, but when a Incan-descended tribe describes English as the “language of the ancients,” I had to raise an eyebrow. Additionally, for every trip onto the highly radiated planet, the teams had a set amount of time they could stay before feeling the effects of the radiation poisoning. Yet on their final journey, suddenly it didn’t seem to matter. At times I found the adventures a bit too over-the-top dangerous, and the plentiful perilous conditions started to feel repetitive. By the end, I just want them to get away and discover the secrets of the Institute.

Overall, I enjoyed Return to Dark Earth. Unfortunately, I think that this is one of those cases where I was waiting for the book for so long, that the hype in my head was bigger than the book itself. Not that it was a disappointing tale. I enjoyed Nera and Nik’s story, and it unfolded just how it should have – filled with passion and danger. I strongly urge readers to start at the beginning of the The Phoenix Adventures to best enjoy Nera and Nik’s romance.

My Rating:  B/B-, Liked It but I had a few small issues

His career plan never included becoming one of the galaxy’s most infamous treasure hunters. And it certainly never included his one weakness: Nera Darc.

Astro-archeologist Niklas Phoenix loved his job studying and safeguarding artifacts at the Institute of Historical Preservation…until he learned that it was all a lie. Forced out of the Institute, he joins his treasure hunter brothers, but now the Institute is trying to lure him back for the ultimate treasure hunt–a return to the planet that seeded life throughout the galaxy. But only one thing convinces him to go–his deadly, seductive rival has joined the expedition.

Dangerous and enigmatic, Nera Darc has made a life for herself where she calls the shots and bows to no one. Niklas Phoenix has become her dark obsession and on the lethal mission to Earth, they are compelled to join forces to survive. But Niklas threatens to tear down Nera’s internal walls and melt the ice around her heart…but she knows caring for someone is just a weakness others can exploit.

As Nik and Nera strip away each other’s secrets, a brilliant passion is unleashed, but the dangers of Earth strike from every side, and a darker enemy is closing in.

4 responses to “Review: Return to Dark Earth by Anna Hackett”