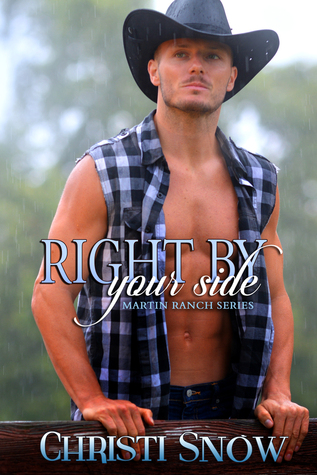 Right By Your Side
Author: Christi Snow
Reviewer: B.
Rating: B

Skye Taylor knows a thing or two about control and the sacrifices it takes to get it and to keep it. She also knows how it feels to be without any whatsoever, and decided long ago that the possible losses involved with sharing her heart with anyone but her best friend aren’t worth the risk. But, when her tour bus crashes, and her world threatens to come apart at the seams, Skye learns that sometimes things don’t work out the way you planned. And love may be the most uncontrollable thing of all.

After the murder of his brother, Thomas, Scott Martin has distanced himself from most of the other people in his life, his family included. While he helps out at his family’s ranch when he can, he’s been trying to build a life for himself away from the constant reminders and pain left by the tragedy. An explosion on a deserted road in the dead of night threatens to disrupt his plans for solitude, however, and winning the love of the wounded, stubborn singer who’s come to mean everything to him might just be the best way to heal them both.

Although this novel follows a similar pattern to some of Ms. Snow’s other stories, I had a slightly more difficult time settling into Skye and Scott’s story. Skye is a contradiction in a couple of ways. Her ability to resist the near-constant pressure to bow to the demands of her record label seemed to conflict with her self-consciousness over her understandably emotional responses to the relentless onslaught of stressful events she suffers. I also felt that her support of her best friend, KC, who is gay, was weakened somewhat by her occasional tinge of discomfort about the subject. Despite these few incidents, Skye is unquestionably a survivor. She doesn’t trust easily, but when she does, she gives herself completely, which made it especially hard to see her get hurt. She is also funny, snarky, bossy, and keeps every man she comes in contact with on his toes.

Another thing Ms. Snow writes well is the “alpha male,” and in Right by Your Side, there are enough of them to populate a small town. Scott is one of many here, but he still stands out in all the ways that make him perfect for Skye. He’s not finding it as easy to be a loner as he thought it would be, turning the idea of a relationship with the perfect girl into a very pleasant prospect after all. He is compassionate and playful, respectful and protective, not to mention extremely handsome in the bargain. Not a bad deal at all, really.

As is the case with some of the other stories by this author, Right by Your Side has some wonderful secondary characters throughout the narrative, too. The other Martin guys are interesting for many reasons, as are the band members, and Josh, the detective who helps Skye and Scott along the way. My favorite, though, is KC Morelli, Skye’s best friend since childhood. I adored KC, whether through the scenes he’s actually in or via Skye’s recollections, and I was beyond pleased to read that he’s getting a story of his own.

Of course, I’ve come to depend on the action and suspense of these stories, and Right by Your Side didn’t disappoint. The faceless “bad guy” could have been one of any number of characters, and I wasn’t able to finish putting things together until close to the very end. I kept changing my mind as the narrative progressed, which I really enjoyed. The threats are both lethal and continual, and the fact that, while they may be near misses when it comes to Skye, they aren’t victimless keeps the tension high throughout the story.

Right By Your Side is both a comfortable and welcome beginning of the new Martin Ranch series. With the return of the Martin men, as well as several other familiar characters, it’s clear that the author’s knack for writing fiercely independent damsels in distress and the men who can’t resist them hasn’t dimmed one bit. While I had some difficulties staying immersed in Skye’s world, I’m excited to see what Ms. Snow has planned for the rest of the series. I’m especially anxious for KC and Josh’s story, as well as for Matthew’s, and will gladly follow this series through to its end.

Best Female Country Artist. Sold out world-wide tour. Record-setting album sales. It’s been a stellar year for Skye Taylor and it’s left her exhausted. All she wants to do is go home to Oklahoma, curl up in her little house, and veg out in pj’s with a pile of junk food. But when her tour bus crashes in the middle of West Texas, her priorities suddenly shift. Now she’s sitting bedside hoping her best friend and bodyguard, KC, survives.

For Scott Martin, he simply wants this horrible year to end. After the murder of his brother, his family is falling apart. With one crisis after another pulling him back to the family ranch, he’s put way too many late night miles on his truck between his family home and Lubbock, where he works as a paramedic. When he comes upon the wrecked tour bus, he has no idea this is one emergency which will change his life forever.

Skye and Scott quickly form a friendship which hints at possibilities of more. But as these two dodge paparazzi, over-zealous label executives, and stalker fans, they soon discover that everything is easier when you have someone you trust RIGHT BY YOUR SIDE. And that becomes even more important when they discover the bus wreck wasn’t an accident…

Purchase Info:
Right By Your Side (Martin Ranch #1)

2 responses to “Review: Right by Your Side by Christi Snow”